One of the best things about being a WeddingBee blogger is the community that exists between current and past bloggers. There are so many people that have this one basic thing in common (being a WeddingBee blogger) and can get together and really help each other with anything that they might have going on in their lives. I’ve really loved becoming part of that community!

So, when I saw that there was a holiday ornament exchange, I knew that I had to sign up! I drew Mrs. Deviled Egg. I didn’t read WeddingBee back then, but I do love me some deviled eggs. A quick google led me to some easy to purchase egg ornaments.

However, after picking up the vibe on the WeddingBee blogger forum, I decided that it would be more fun to make an ornament.

I immediately knew that I wanted to make my ornament a pun on the “devil” in deviled eggs. However, I wanted to make it 3D. I decided that my options were clay or plush. Since I have zero experience with sculpting, I started with plush. 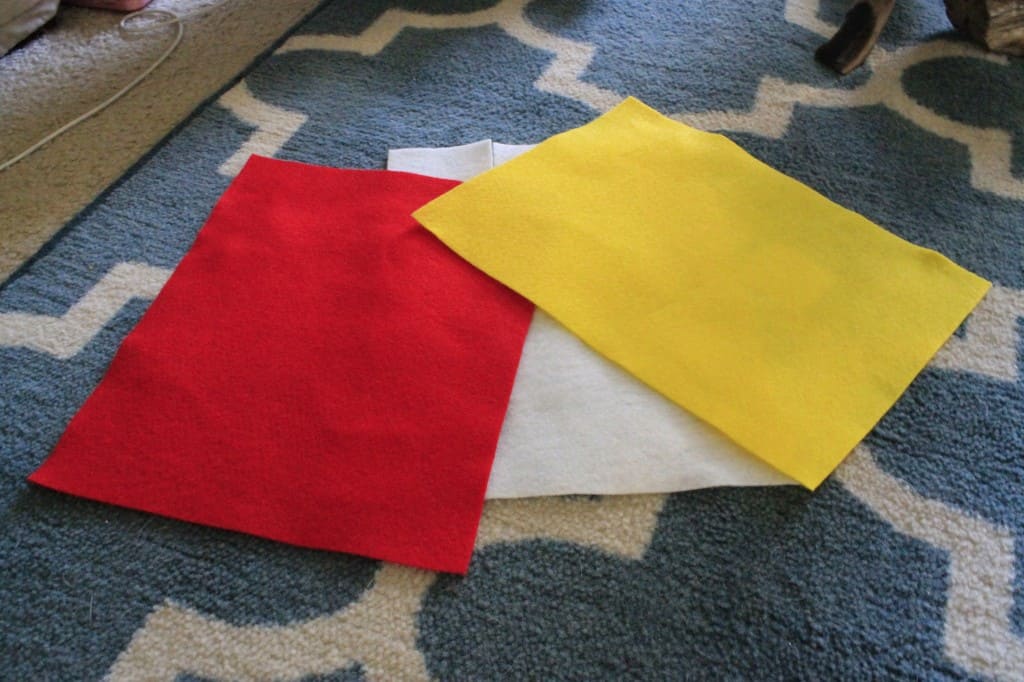 I started out by cutting out my egg shape – One egg that was actual chicken egg sized, and one that was about 1 cm bigger all the way around. Note: I traced the egg shape (I just pulled up a picture of an egg on my ipad, put the felt over it, and traced with a marker) at first, but the marker showed through the felt. So, use a light pen OR do like I did and trim the marker off. 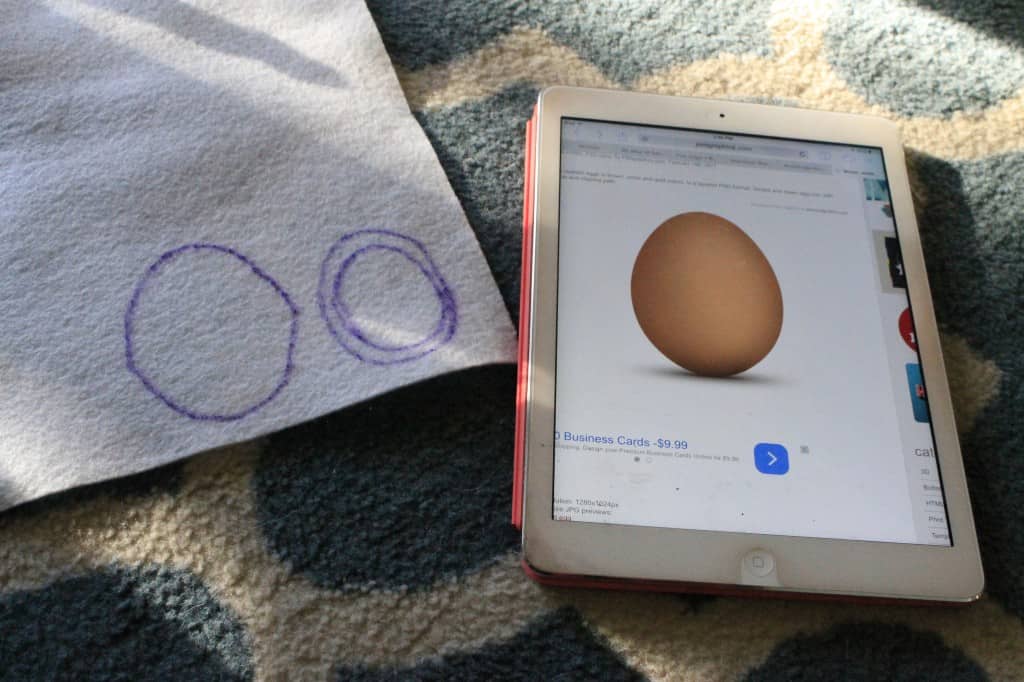 Then I cut a yellow circle for the yolk (freehanded like a boss) and little red slivers for horns, beard, eyes, nose, and mouth. I could have used black for the face but liked that the red reminded me of paprika. I eventually also cut out a red devil tail. 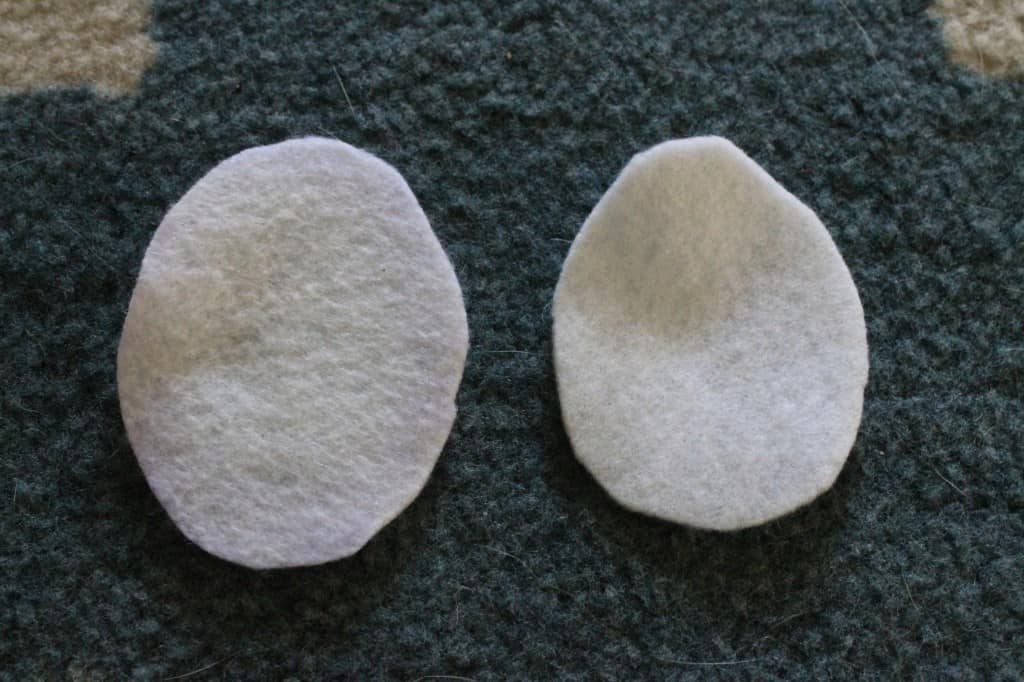 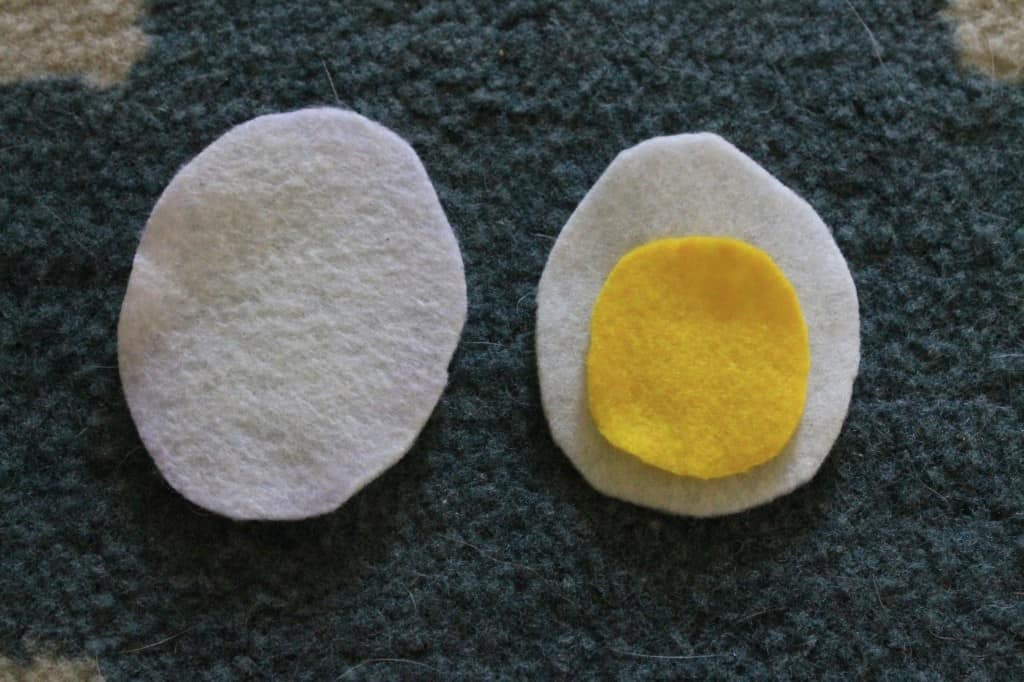 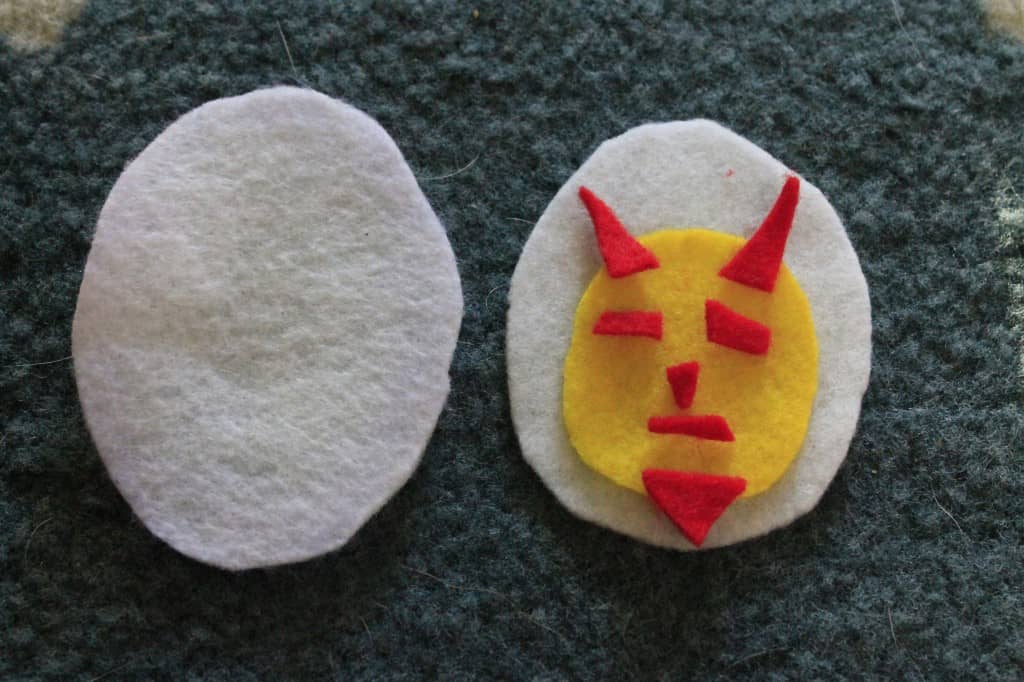 Then I started to sew. I used a simple whip stitch (maybe? Trying to remember from my girl scout days) to attach the yolk to the smaller white egg. I just used small stitches in the color of the top piece of felt (yellow for yolk, red for face, white for egg on egg). Cut a piece of thread, string it through the needle, fold it in half and knot the end. Stitch up from the back into the yolk, then stitch down into the white, just barely outside the yolk. Continue all the way around the yolk, then knot the end and trim your threads. Pretty simple even for non-sewers! 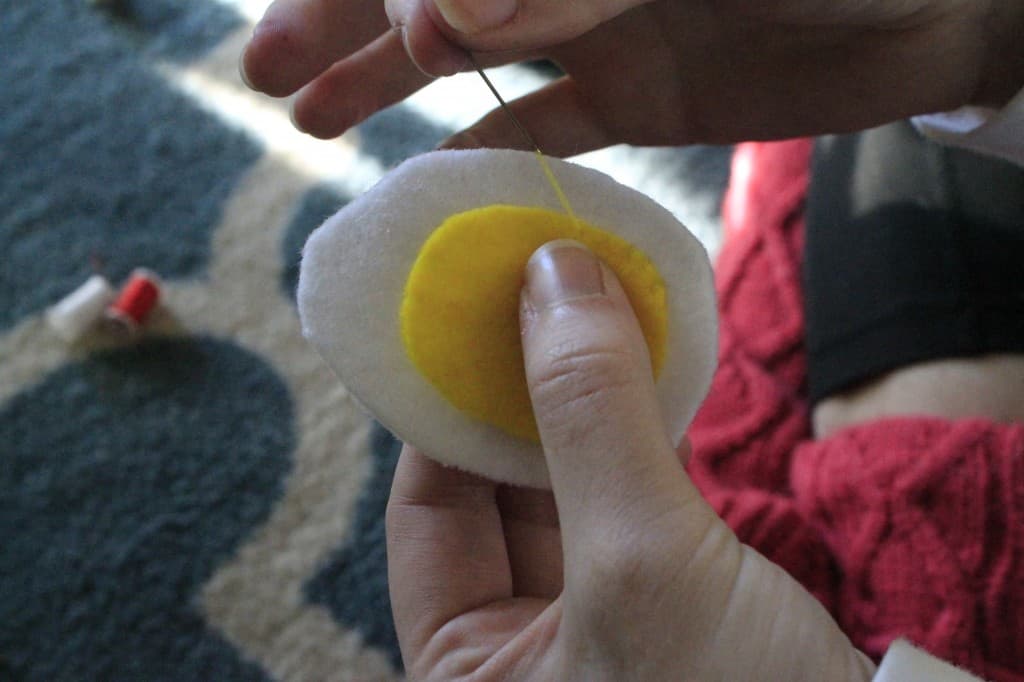 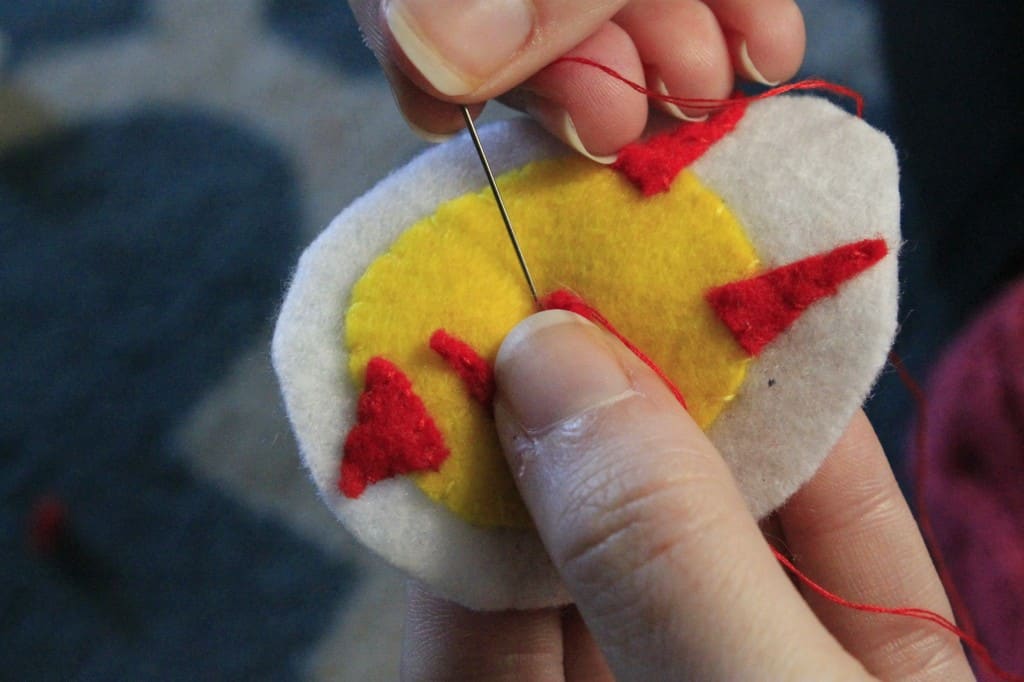 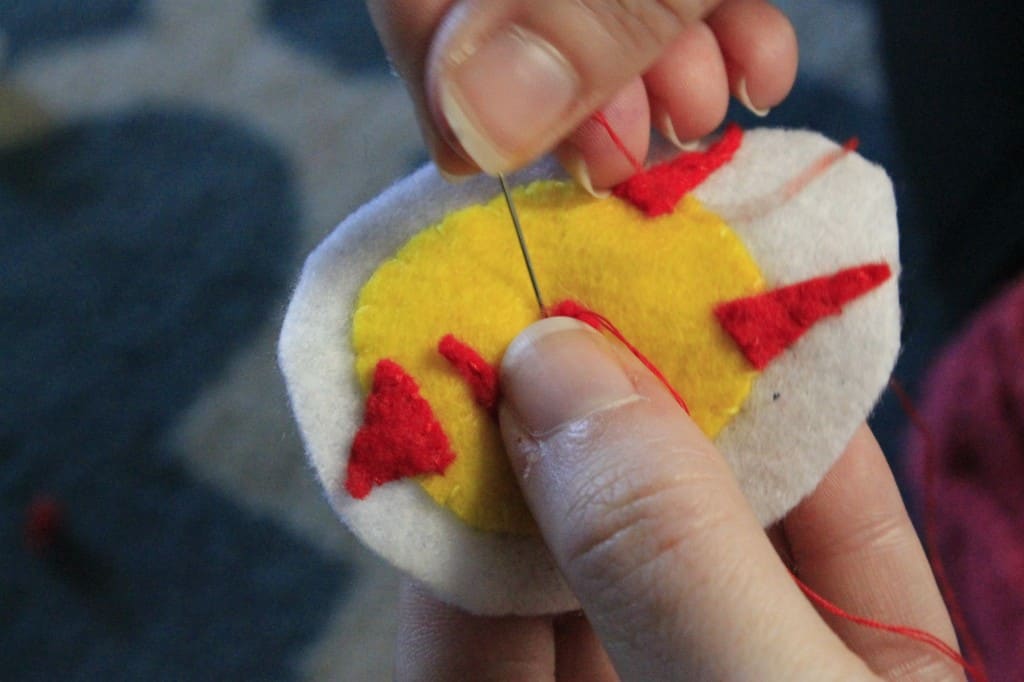 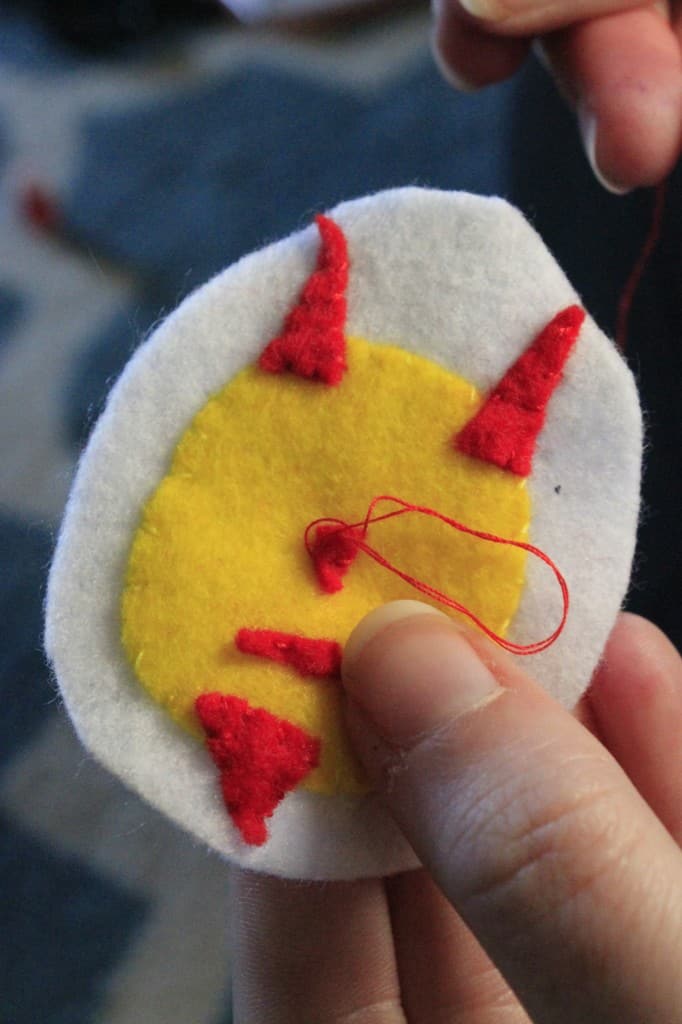 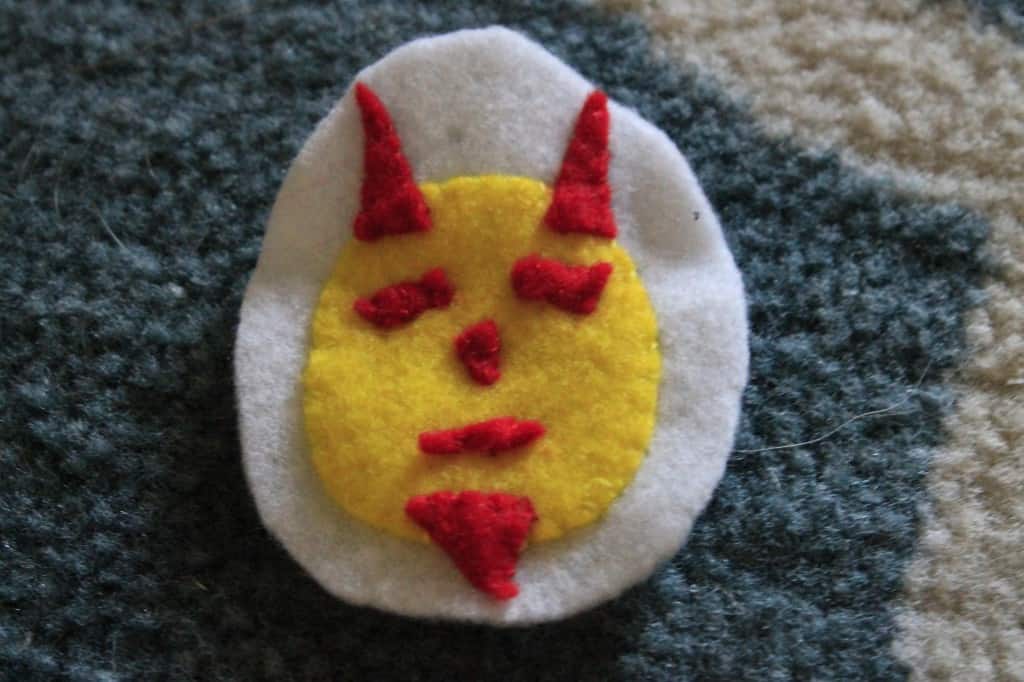 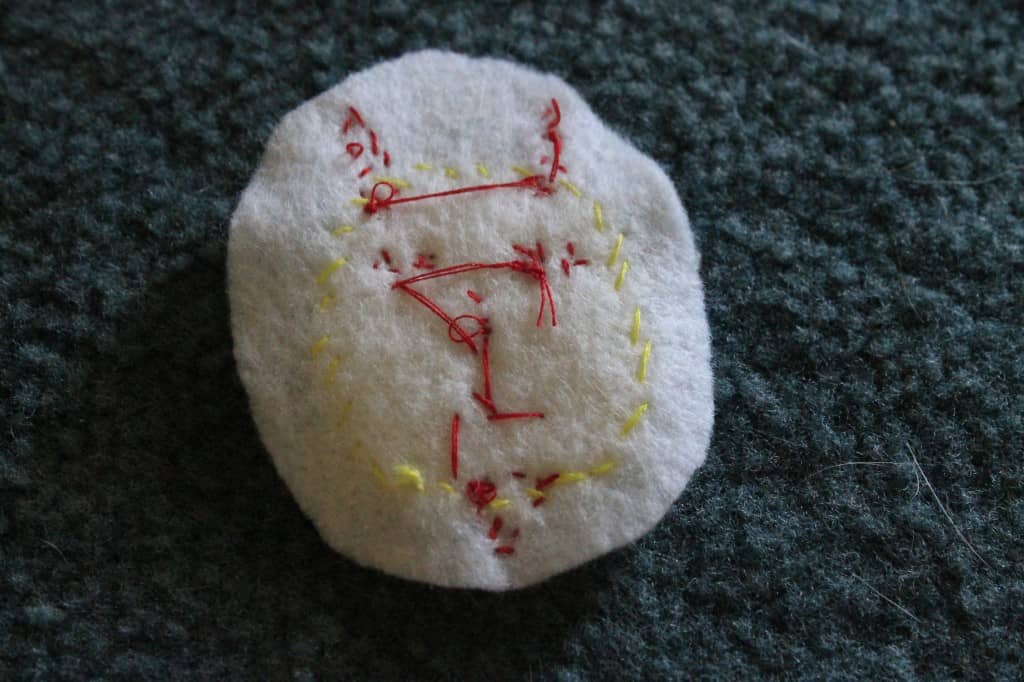 Then I sewed the red pieces on. I started with the horns and beard and worked my way in.

I also went ahead and added my tail to the large backing piece. I should have added the small metal loop at this point as well – it’s much easier to sew things on when they are flat, as compared to when they are all sewn up. 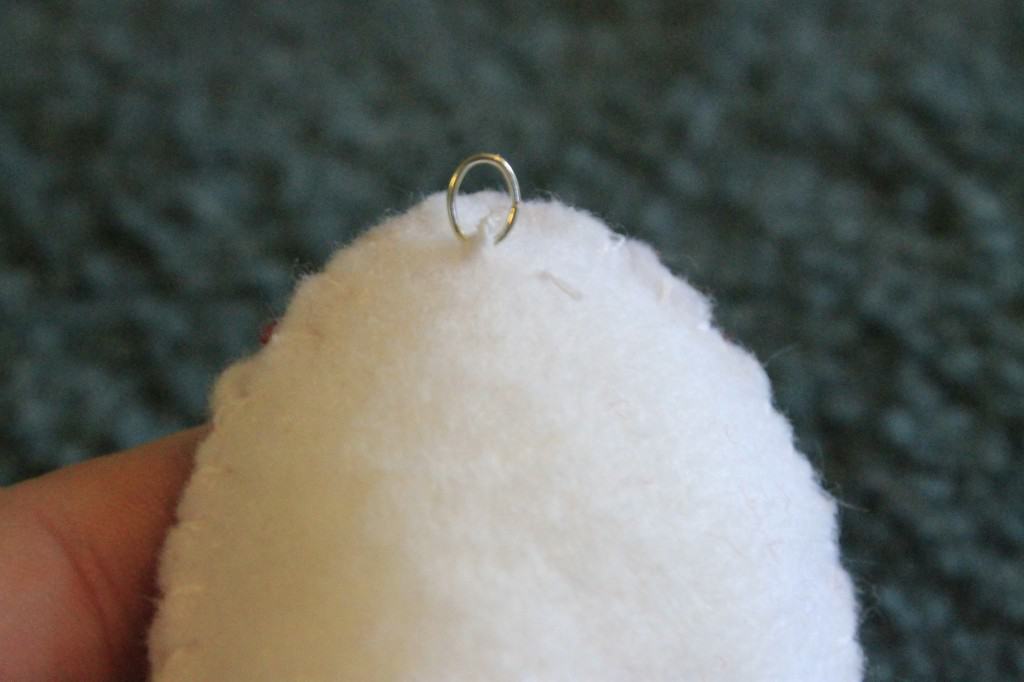 Now is the time to make the egg 3D. I first cut a slit in the bottom back of the large egg piece, next to the tail. 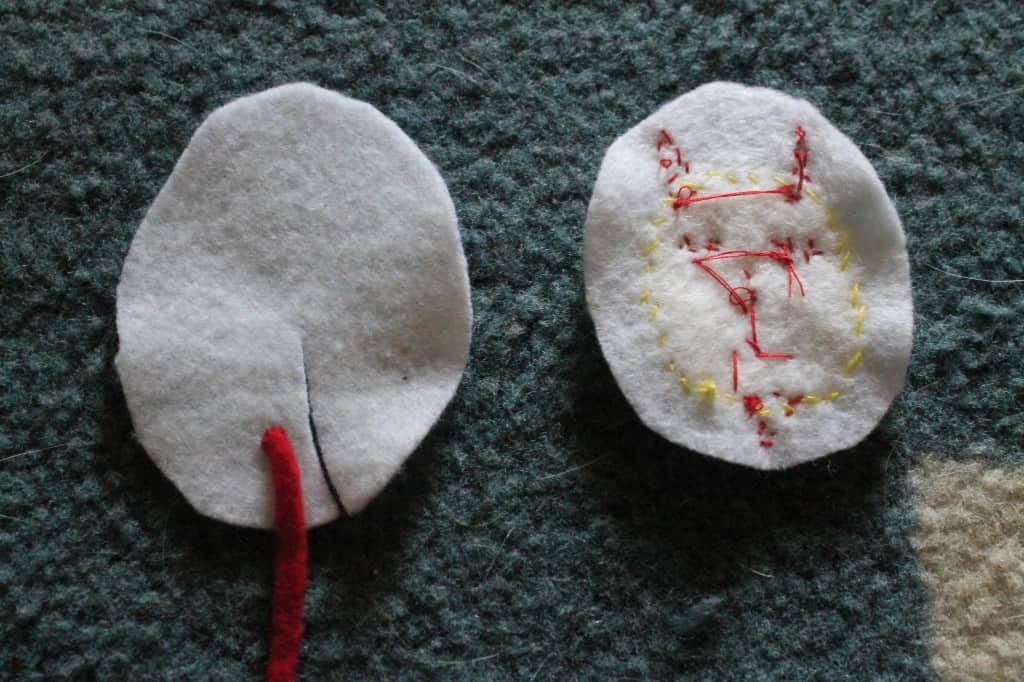 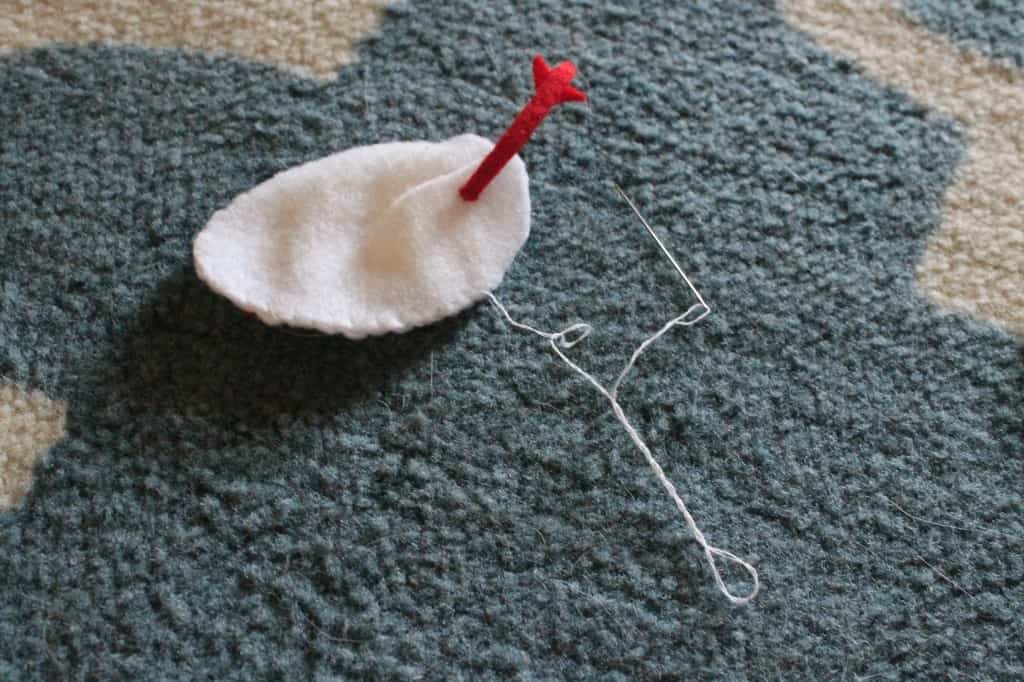 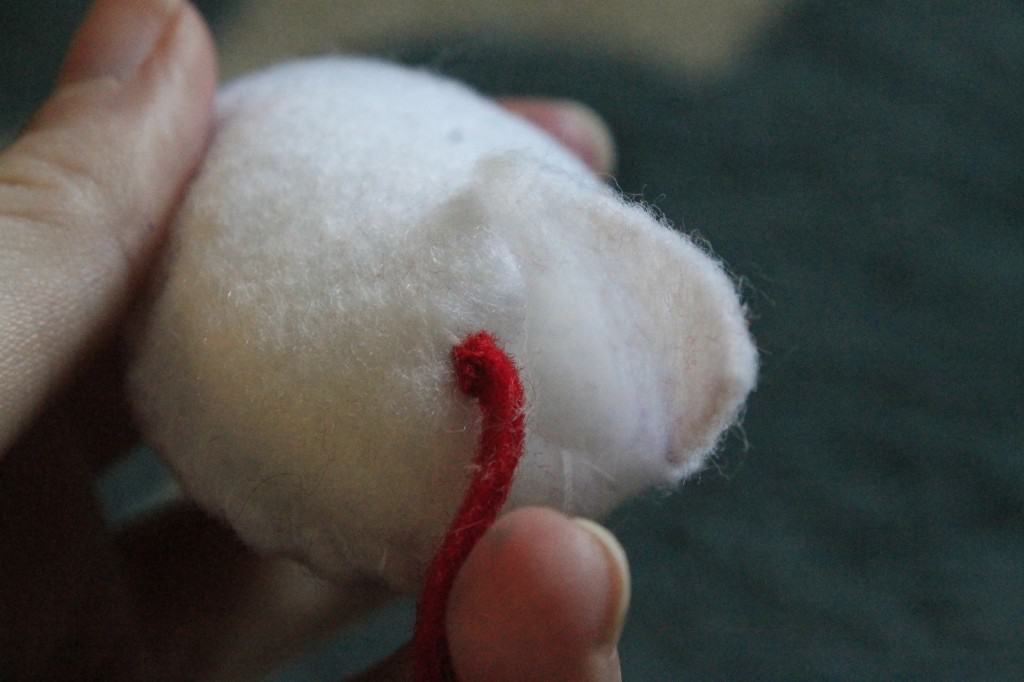 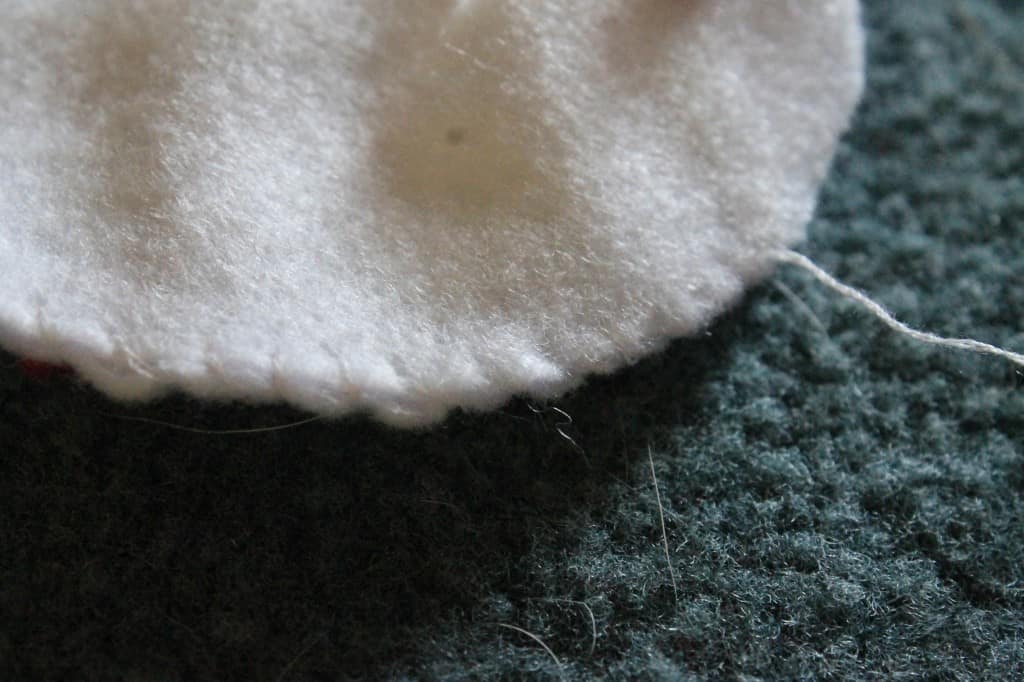 I hope that Mrs. Deviled Egg likes this guy. He’s clearly homemade but I think that he’s really sweet. My sister loves deviled eggs – maybe I should make her one for Christmas? 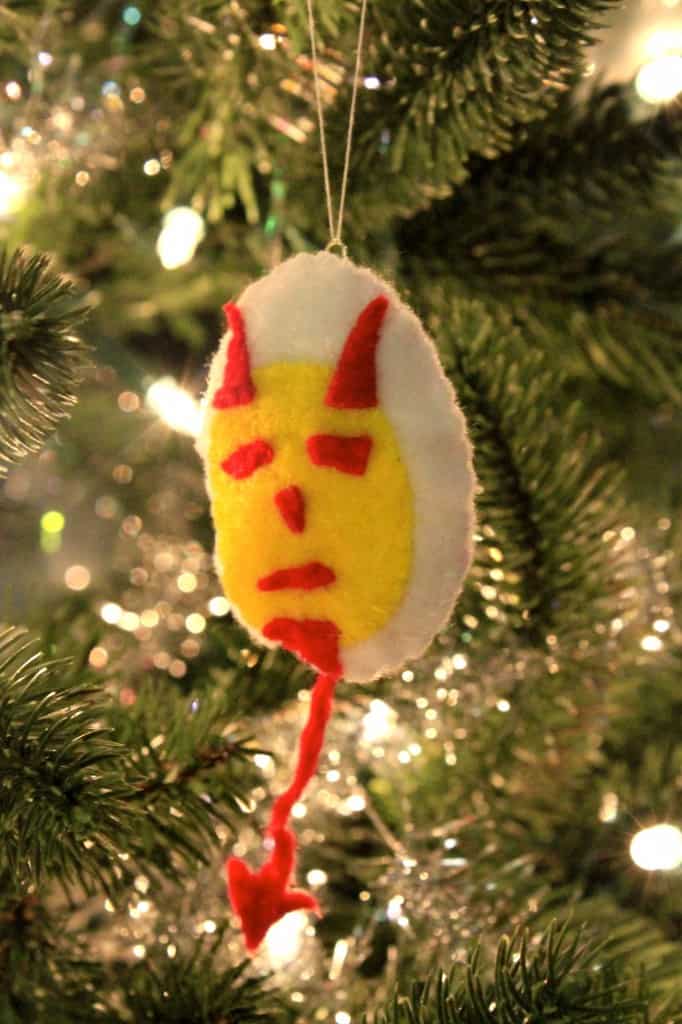 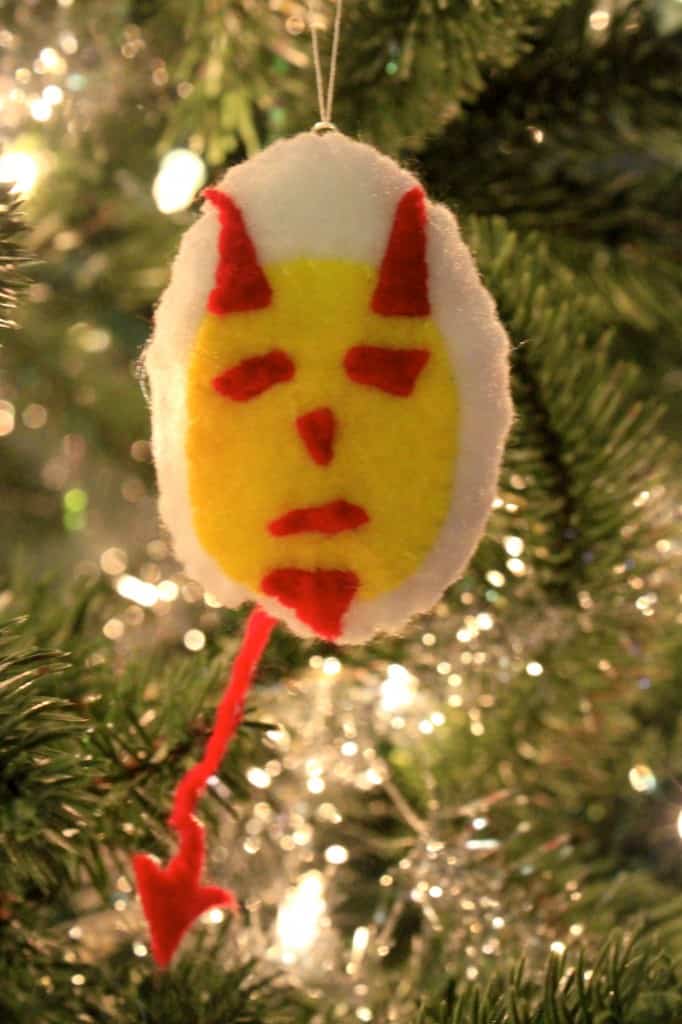 I had never made any felt guys before (thought I cut and glued these fruit slices a few years ago) But it was really easy! I totally recommend it for a fun and personalized ornament.

Have you taken part in any ornament exchanges this year?