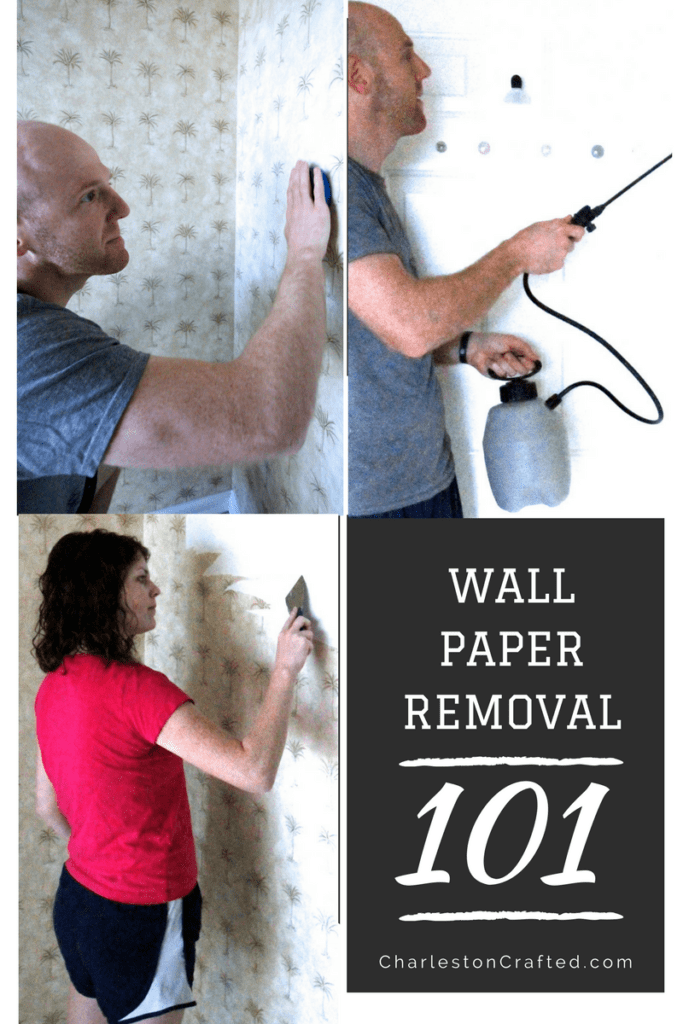 I am so excited to start our kitchen makeover this month! I have tried to break up the DIY to-do list into one major task per month, along with some hired-out tasks in between. The major task for January was removing the wallpaper and painting the walls. 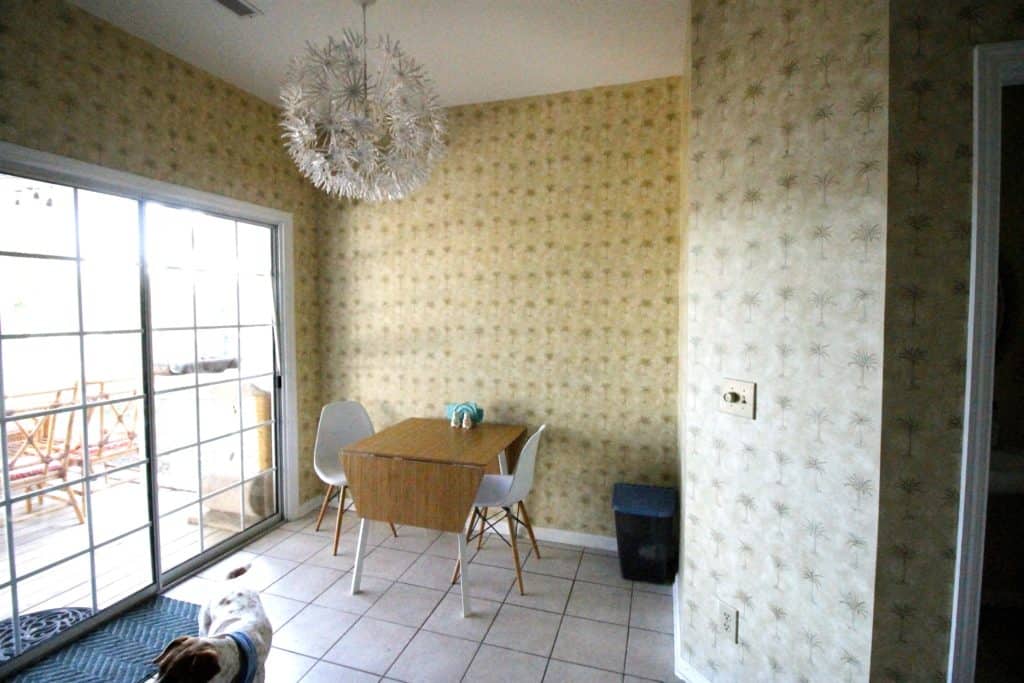 Funny story about this wallpaper that I love telling. Our house was a rental prior to us buying it and the previous owners made a lot of great updates like replacing 90% of the flooring (everything but the kitchen actually) and having all the walls painted a neutral color. We met them randomly before the house even went on the market and they let us tour it. On that tour they showed us the wall colors and floor samples and told us what they planned to have done. Sean pointed at the kitchen walls and said “and remove this wall paper, right?”

And the owner said “Oh no, this is really nice wallpaper!”

I don’t know why I think this is so funny. On one hand, Sean’s not really usually the one to suggest doing anything that will cost extra or take more time, so for him to say to remove the wall paper tells you that it was bad. But the owner really really loved this wall paper. I imagine that she picked it out and convinced her husband to buy it and we know they spent a lot having it hung (we got their invoice in a packet of house-related papers at the closing).

It just screams 1995 to me. If wallpaper is your jam, good for you, but I change my mind too often to handle anything as permanent as wallpaper. This particular specimen was way too beige (warm colors while I prefer cool colors) and honestly just looked like a crap ton of palm trees to me. Like, I get it, we live at the beach. No need for the constant reminder. If only they had planted an actual palm tree in the yard….

I digress. Removing the wallpaper was a job. It wasn’t particularly difficult. I think that our popcorn ceiling removal has put everything into perspective. It took portions of 3 days but we could have done it in two if we wanted to, but we spaced it out and didn’t try to do steps before the previous step was dry.

How to remove wallpaper

Day one was the actual removal. We made a video explaining how to do it, but here are the steps:

Our biggest problem was, shocker, being patient. At one point early on, I think Sean really decided that this wasn’t coming off and was trying to figure out how to repair the scoring. It came off, it just needed to sit ~ 30 minutes. 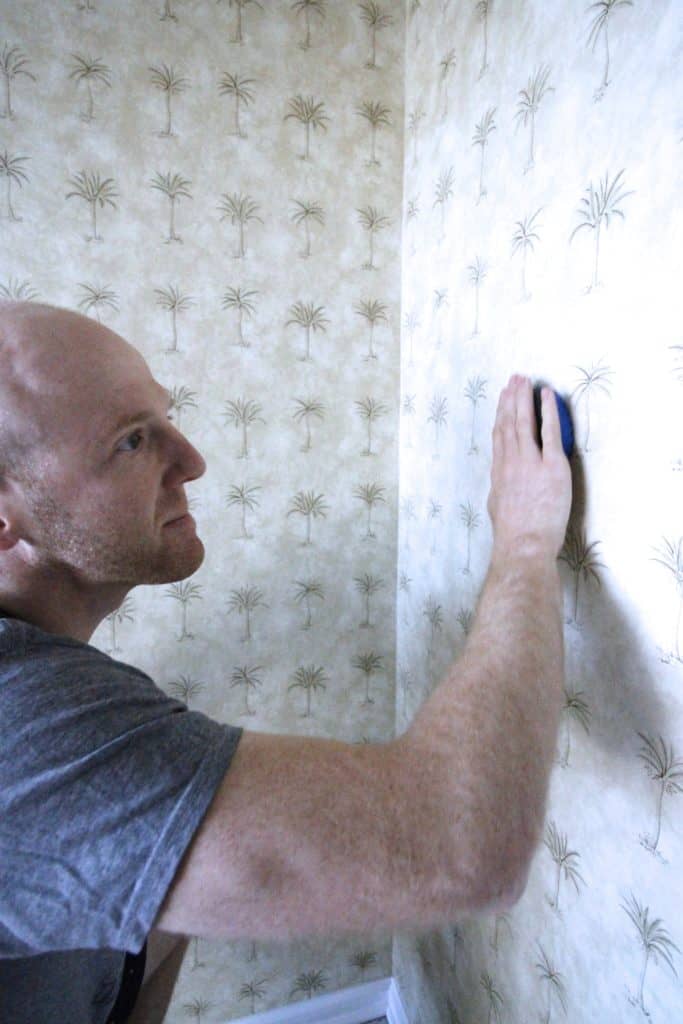 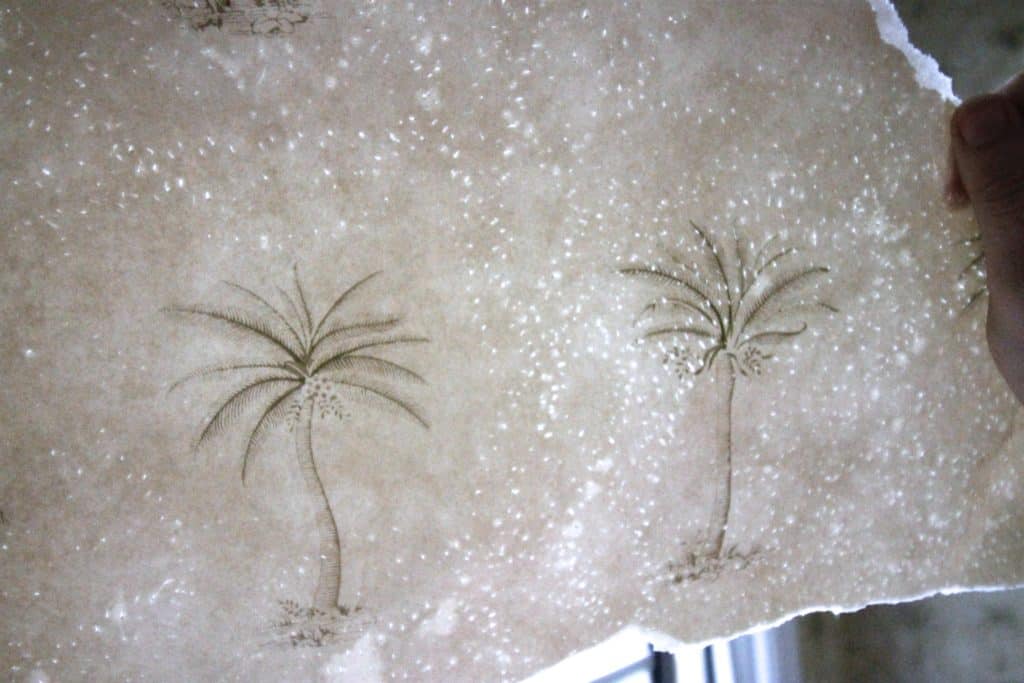 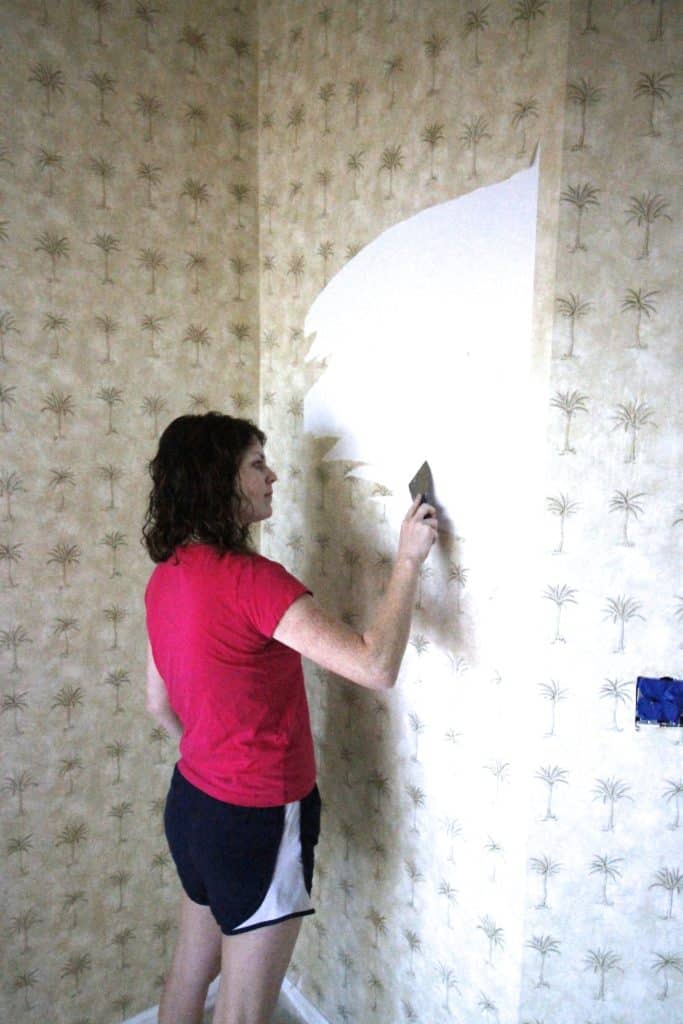 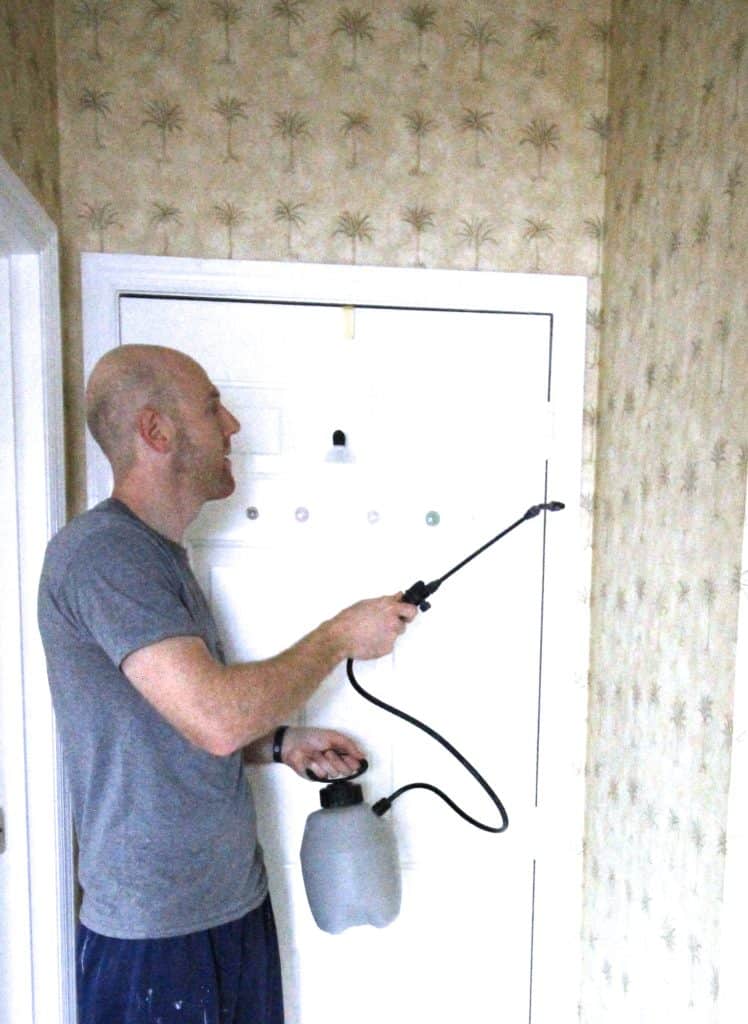 We let the walls dry over night before moving on to the next step. Day 2 was really a half day and Sean spackled any messed up bits of drywall and also sanded the whole wall gently. I painted the edges and everything that needed to be hand-brushed, like trip and small areas, with one coat. 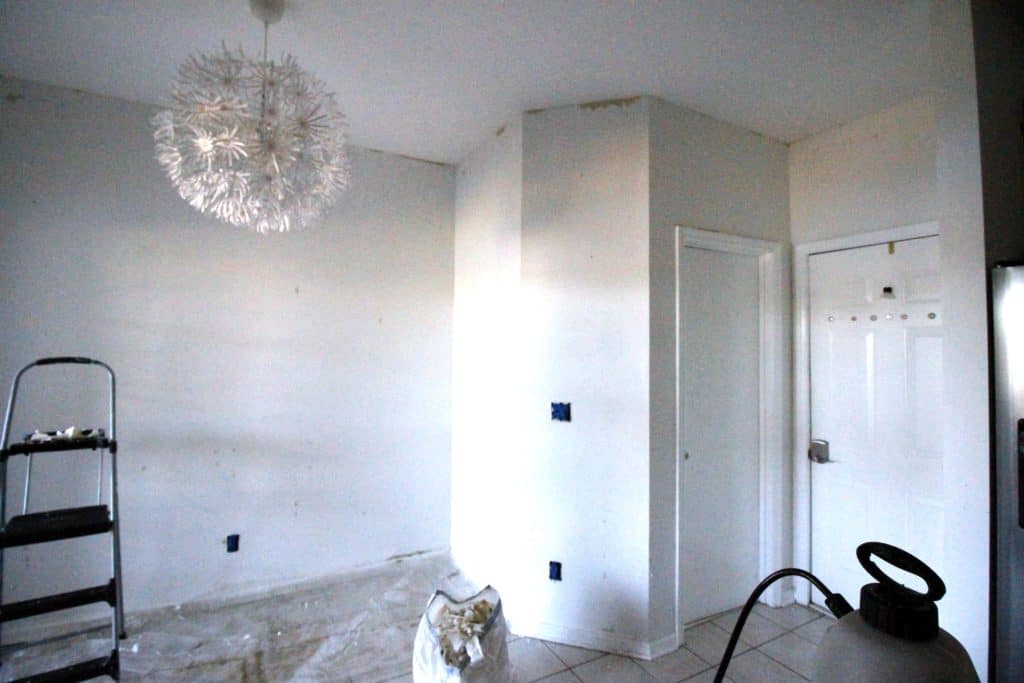 Day 3 we sanded the spackle and then rolled paint and did painting touch ups and final touches. This was actually really easy at this point. Everything was already taped, edges were done and it was clear. We discovered a few more pieces of wallpaper backing that were still stuck to the wall when we painted it. It was pretty obvious that something wasn’t right, so we just grabbed the scraper again, scraped it off, and painted over it before it dried. You could tell right away. 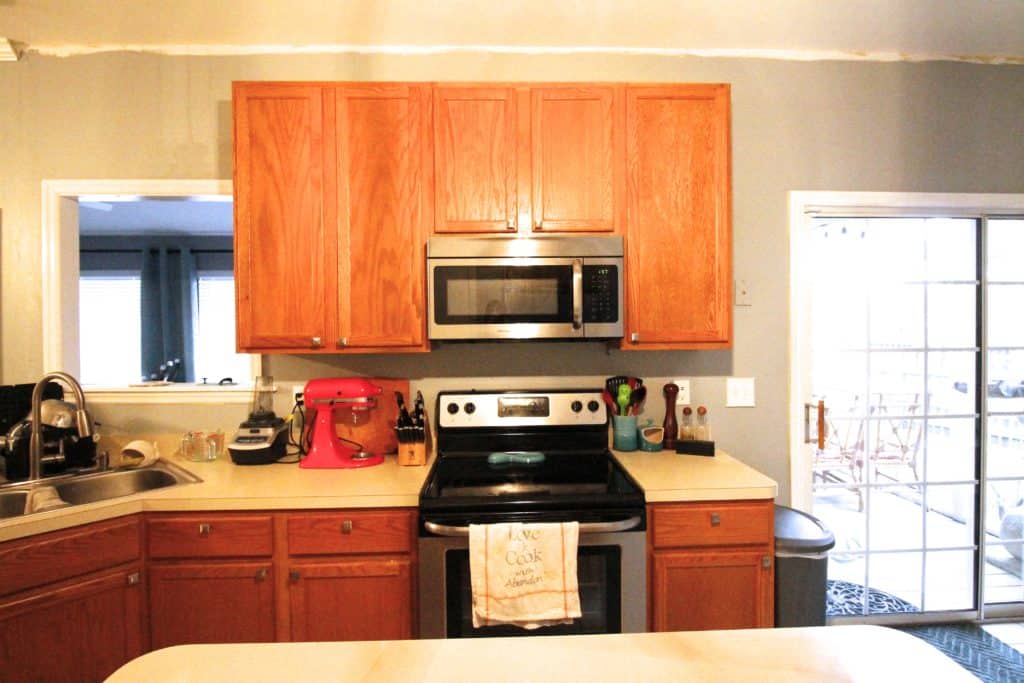 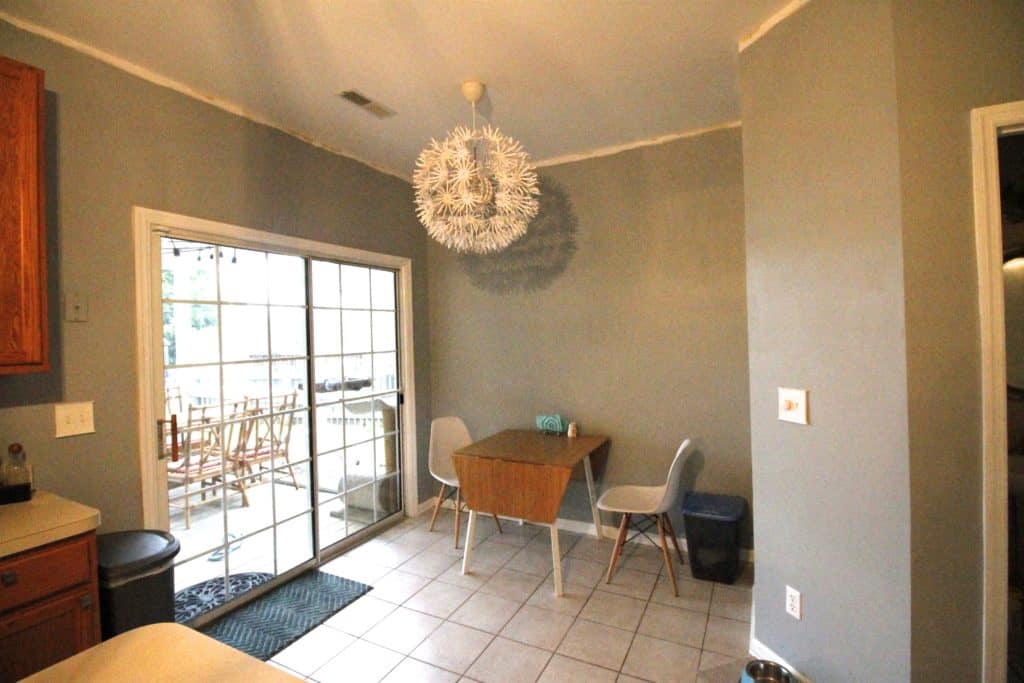 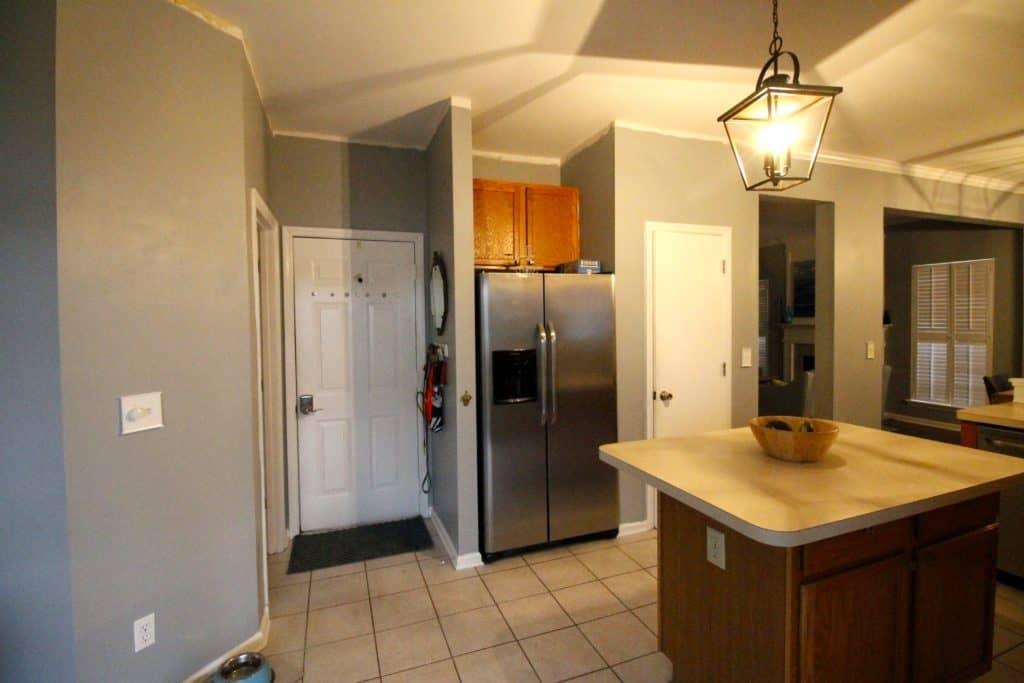 In the end, it looks great. Just like with a bunch of the other projects in our house, like the scraped ceilings, torn down walls and extended fireplace, we found ourselves immediately saying, “Wait, what did this look like before?” It’s just one of those things that seems like it was supposed to be that way, so we can’t believe we had to spend three days making it happen, but we’re very happy we did.

Onto the next phase of the kitchen… 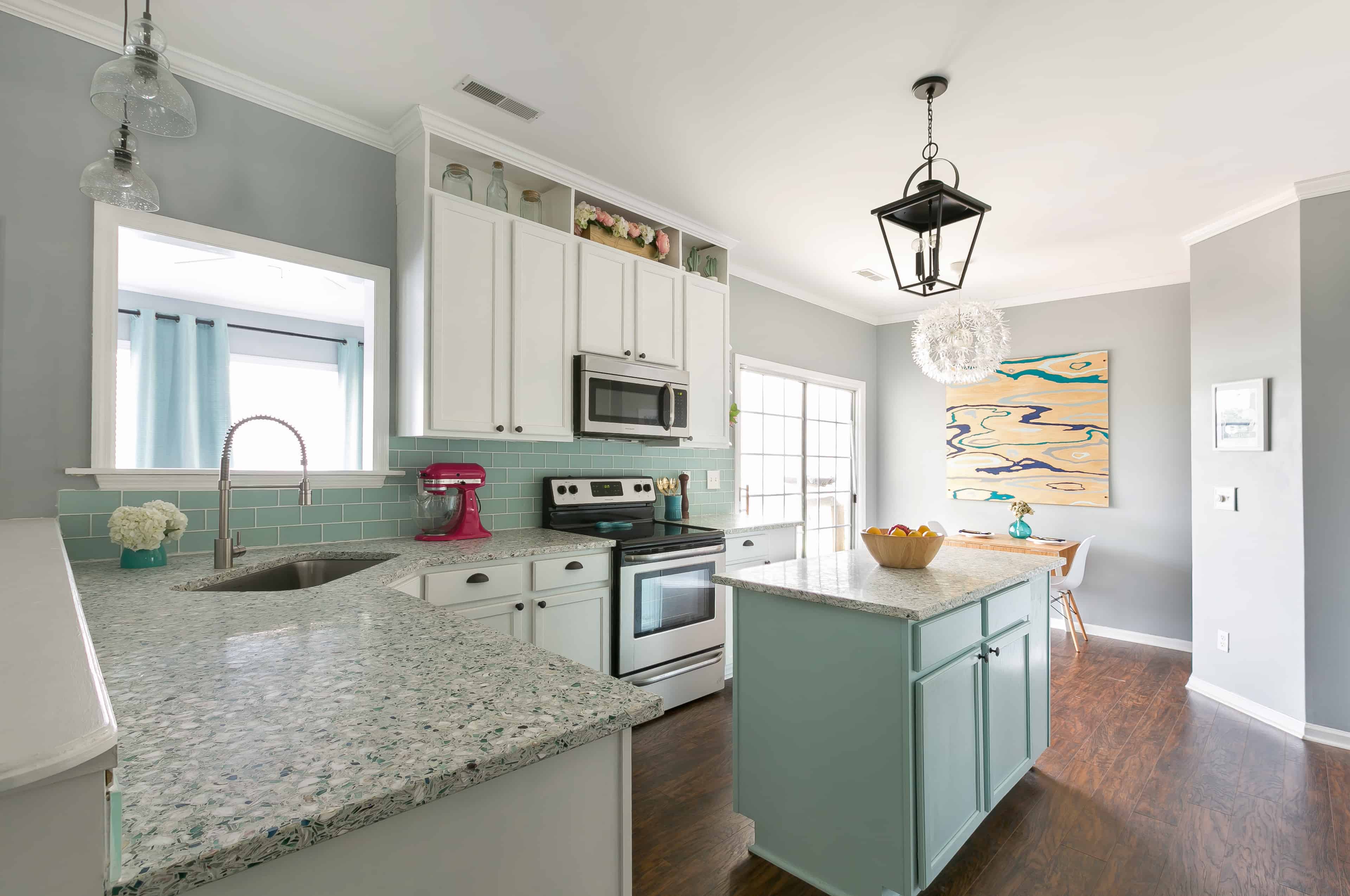 Here’s our kitchen in the end! See tons of pictures here.

Kitchen looks awesome...btw...did you guys paint kitchen cabinets or replace...cant remember at this point i have been following for a long time...transplant from South Carolina myself...

Thanks for following for a long time! We painted them! https://www.charlestoncrafted.com/learned-painting-kitchen-cabinets/

Can't wait to see what the kitchen will look like!