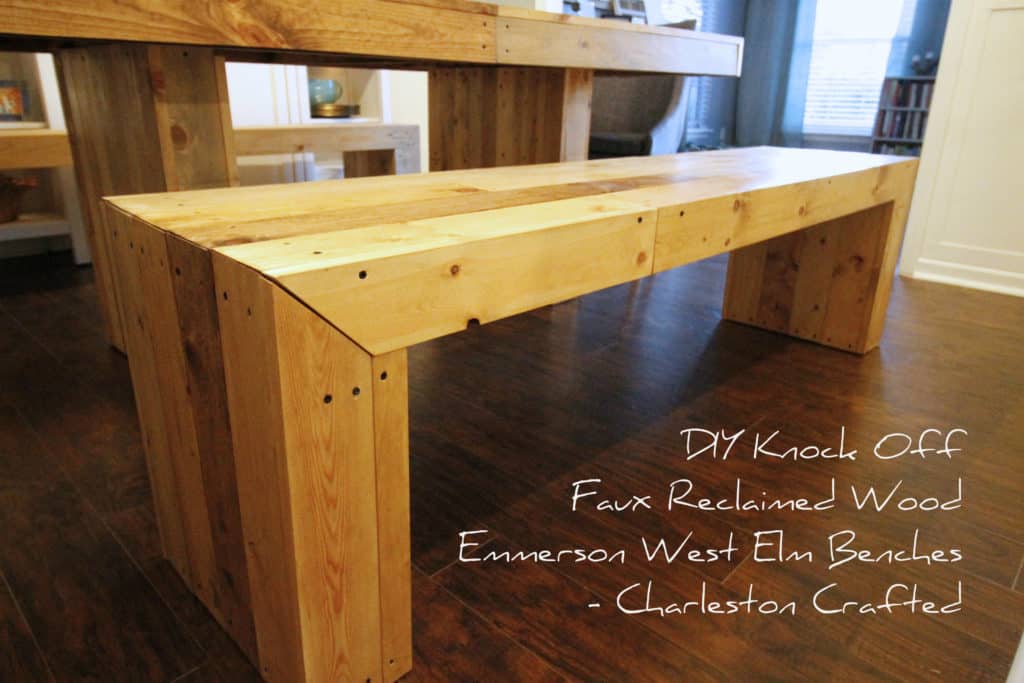 I’ll admit- I had a lot more problems building these benches than I did with the table, but it shouldn’t have been that way. I just kept running out of wood for some reason. Even though I did the math, I ended up with issues. I also had to make some design changes halfway through the first bench that required another trip to the store to figure that out. In the end, no real problems.

I built the bench using the same system as the table. I started with the bench top using two 63″ 2x4s and five 7″ 2x4s. Using a Kreg jig, I created the rectangular top with the 7″ pieces in between starting on the edges and putting the three others evenly spaced. 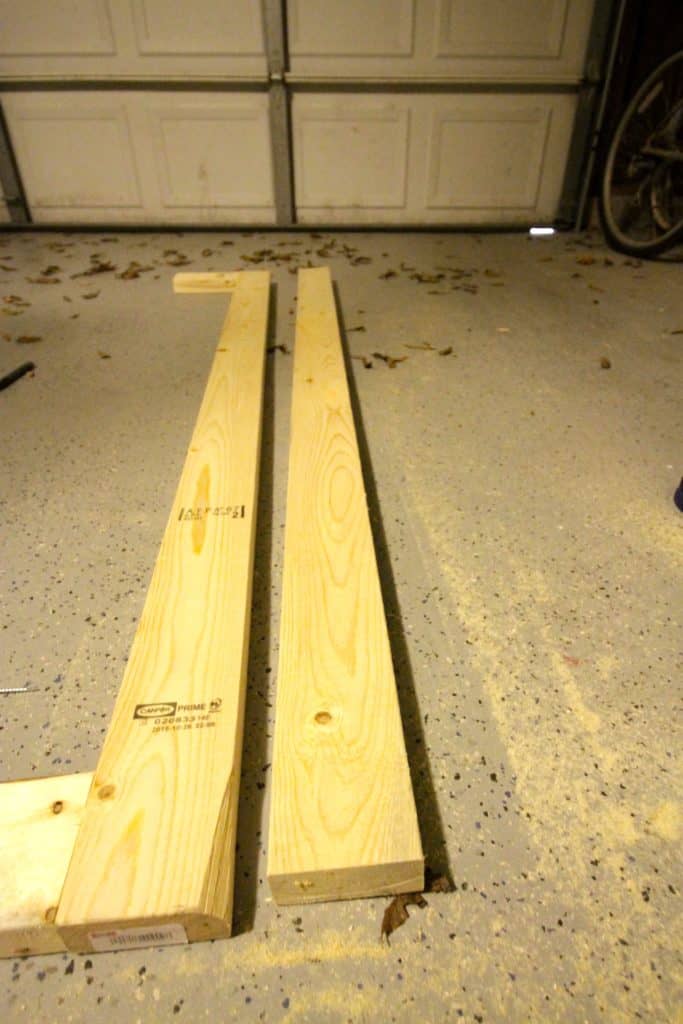 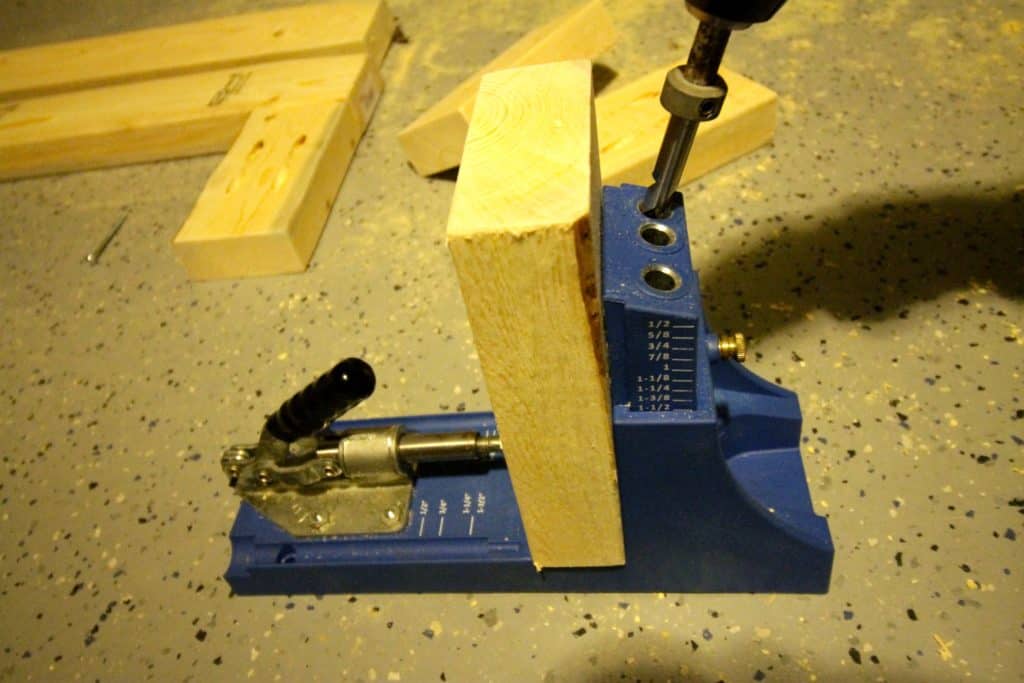 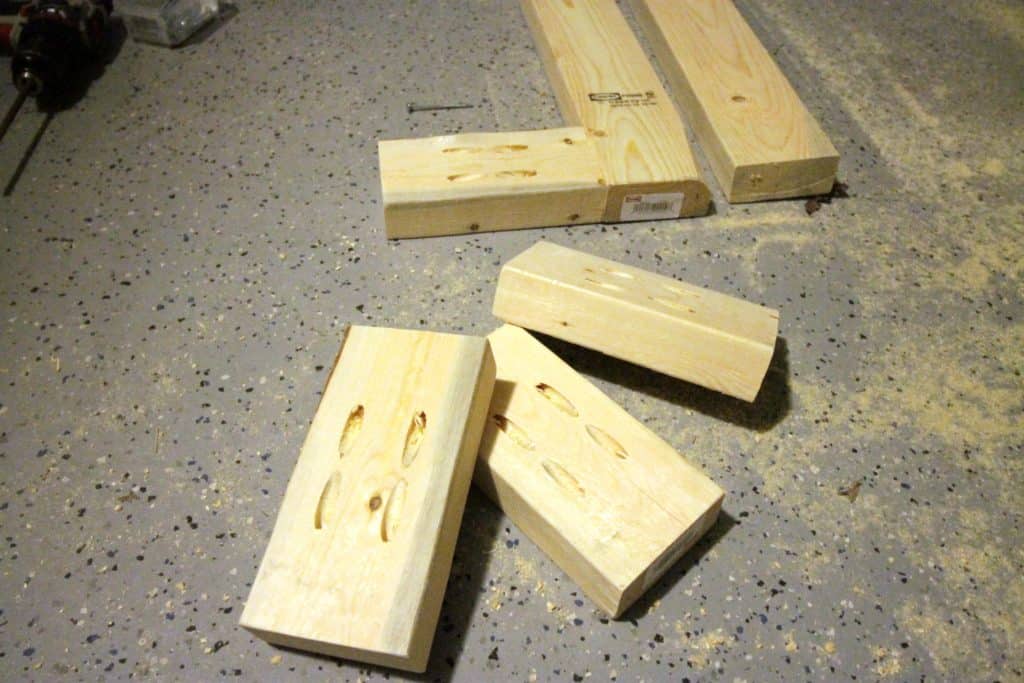 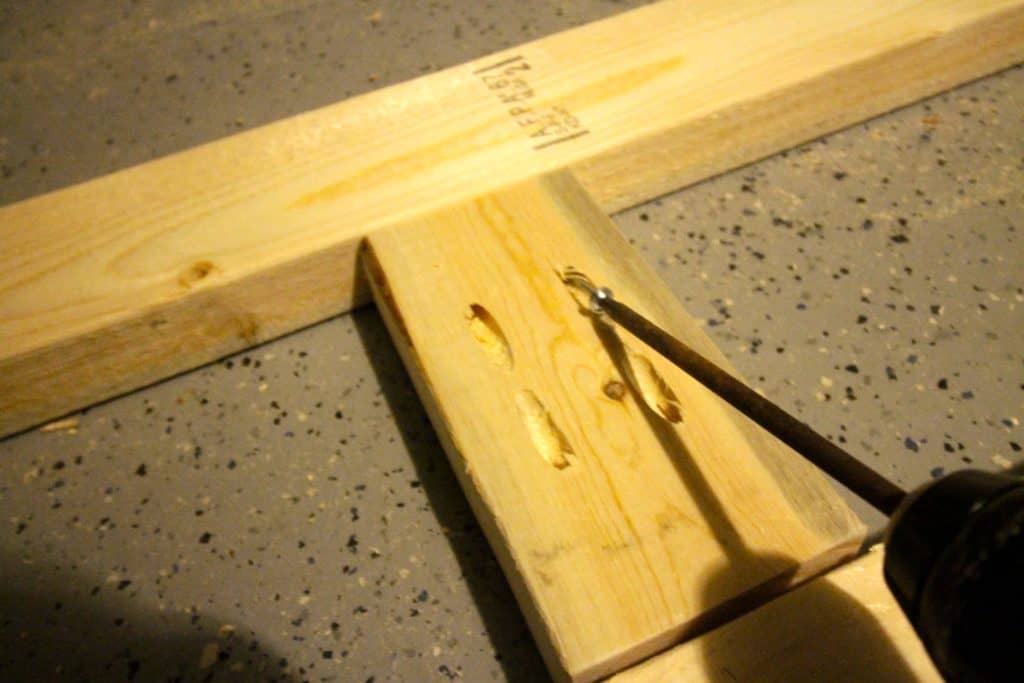 I made the legs in a box frame with 14″ pieces on the top and bottom with 13.75″ pieces going up. I secured them with deck screws and then put them on the ends of the bench top. 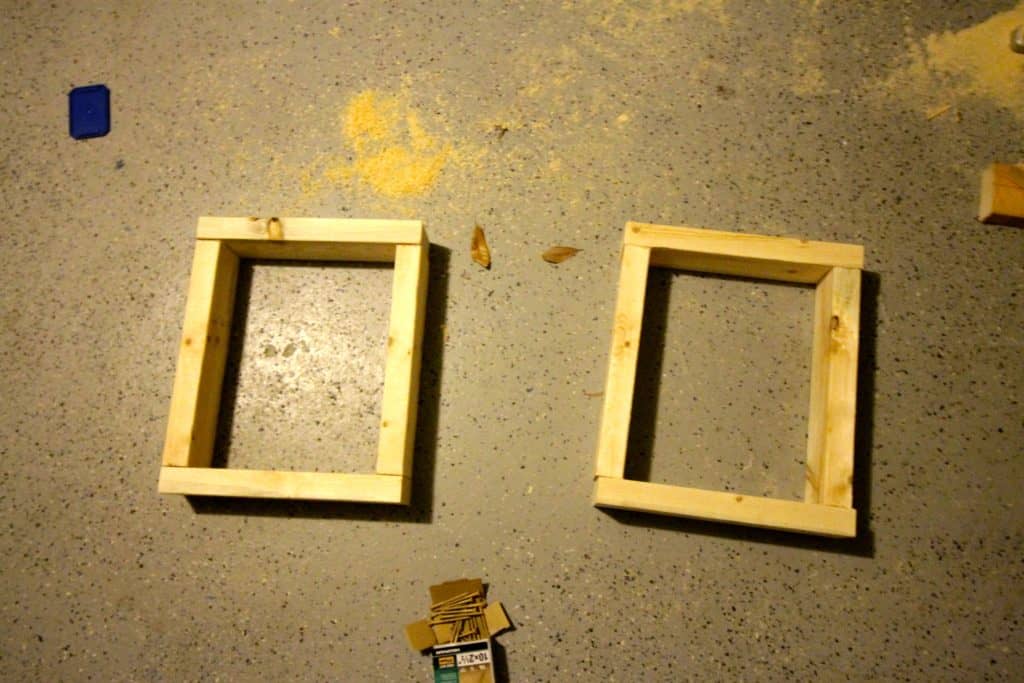 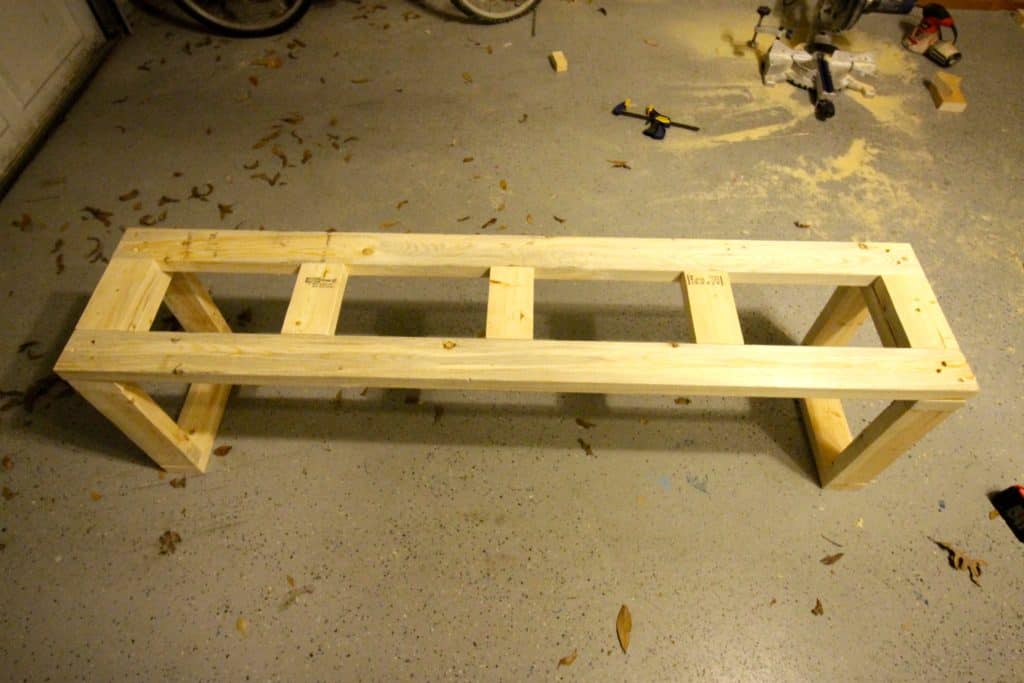 The best tip I have for attaching something like this is to angle your screws in opposite directions and drive them in at angles instead of driving them straight down. 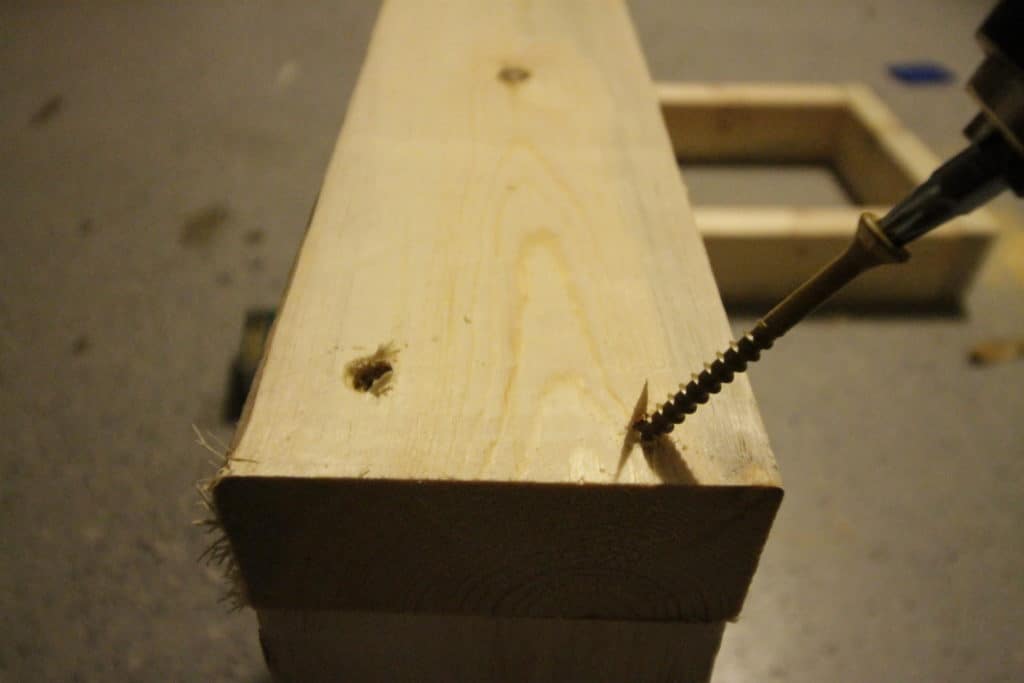 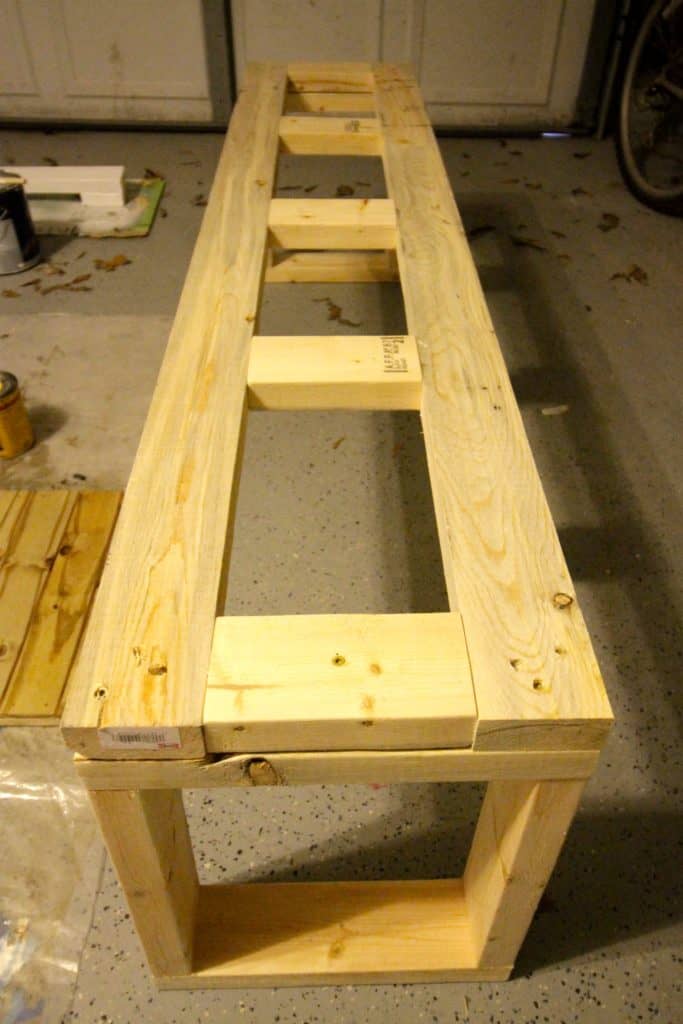 With the frame built, it was time to add the 1×4 paneling. The top of the frame was four 1x4s across, all cut at different lengths in order to give it the look of various pieces of wood. Each piece of wood was stained in one of four colors in alternating spots. The pieces on the ends had a 45 degree mitered cut to align with the pieces that would be coming up the side. 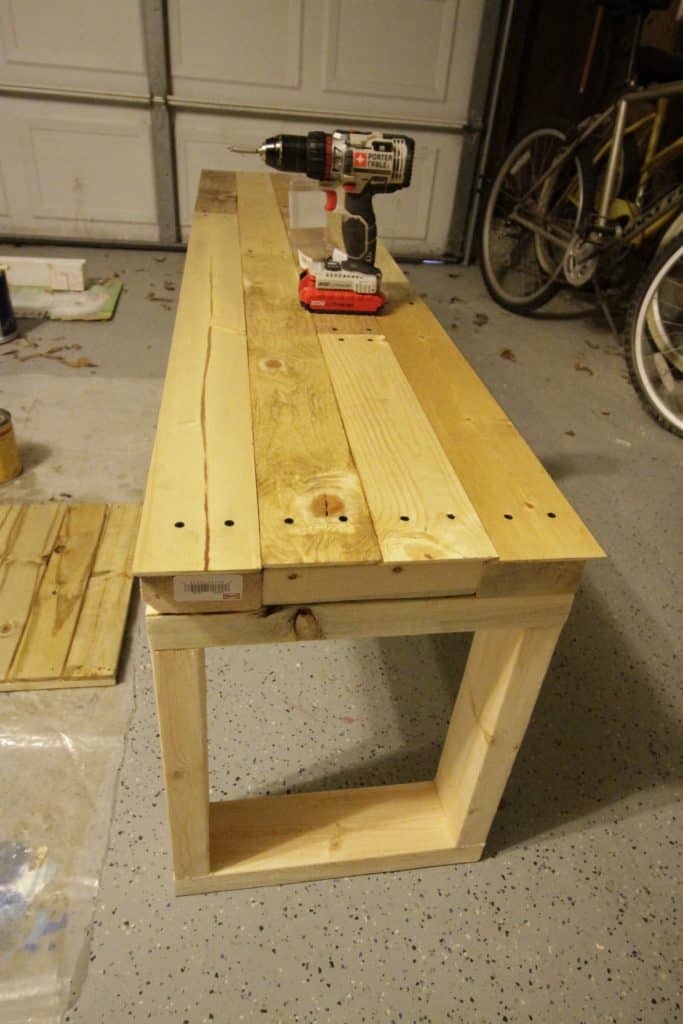 After attaching the top, we added the pieces to the outside to create a waterfall look. This was the main difference between the benches and the table. The waterfall look gives the benches a look of a continuous piece of wood going down the side.

After the outside end pieces were on, we added straight cut pieces to the inside of the leg frame to fill it in.

Finally came the outside sides. We cut pieces to the same lengths as the top pieces so that they would look like a 4×4 piece of wood coming down. We gave these a beveled 45 degree cut to angle with the legs coming up the sides. 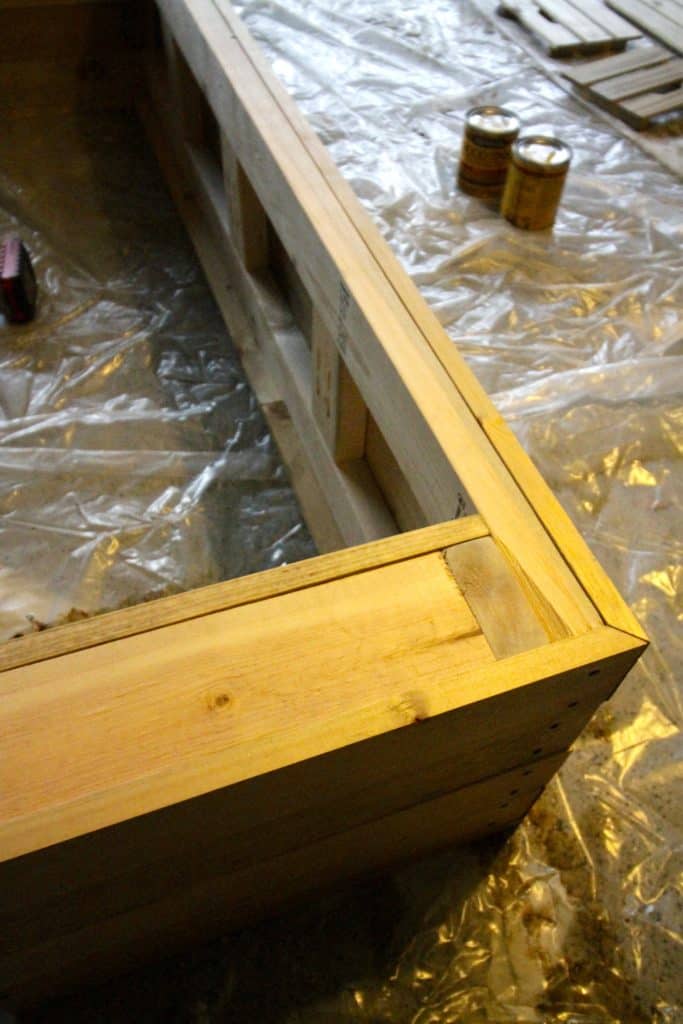 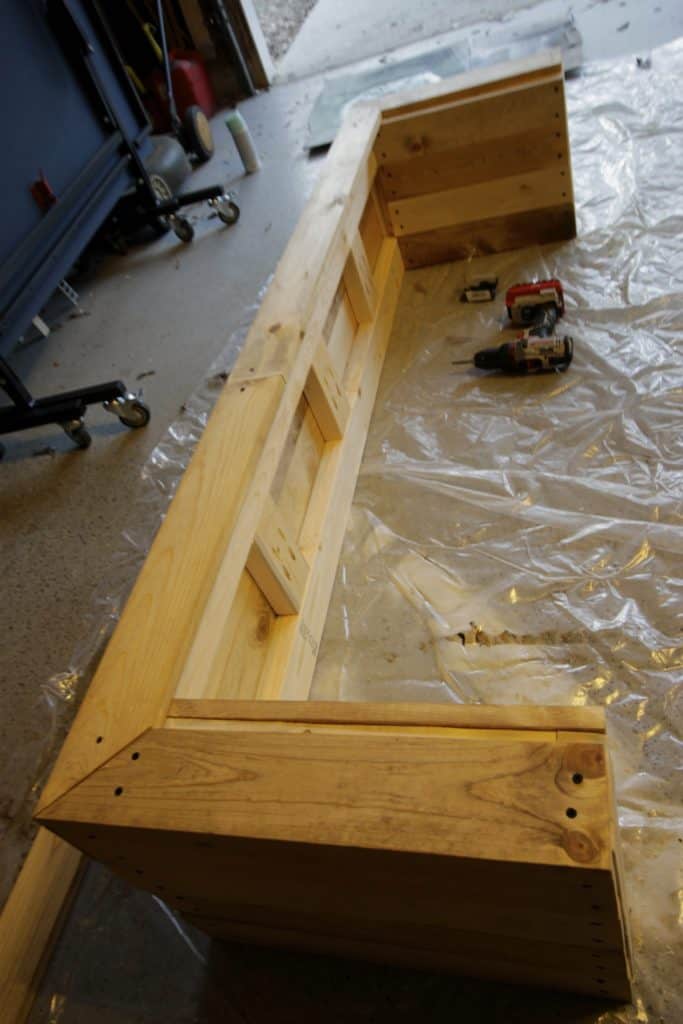 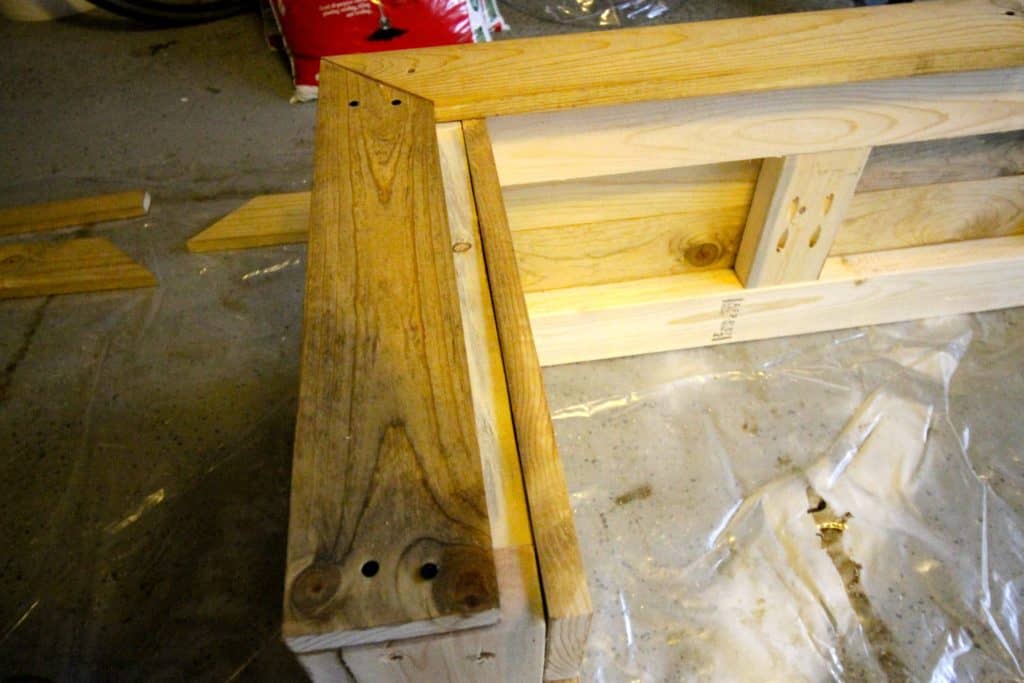 The final four pieces of wood were 1×2 pieces of pine that covered the last bit of a corner and made seamless boxes for the legs.

In the end, the entire thing looks beautiful. The waterfall sides look so good and refined. 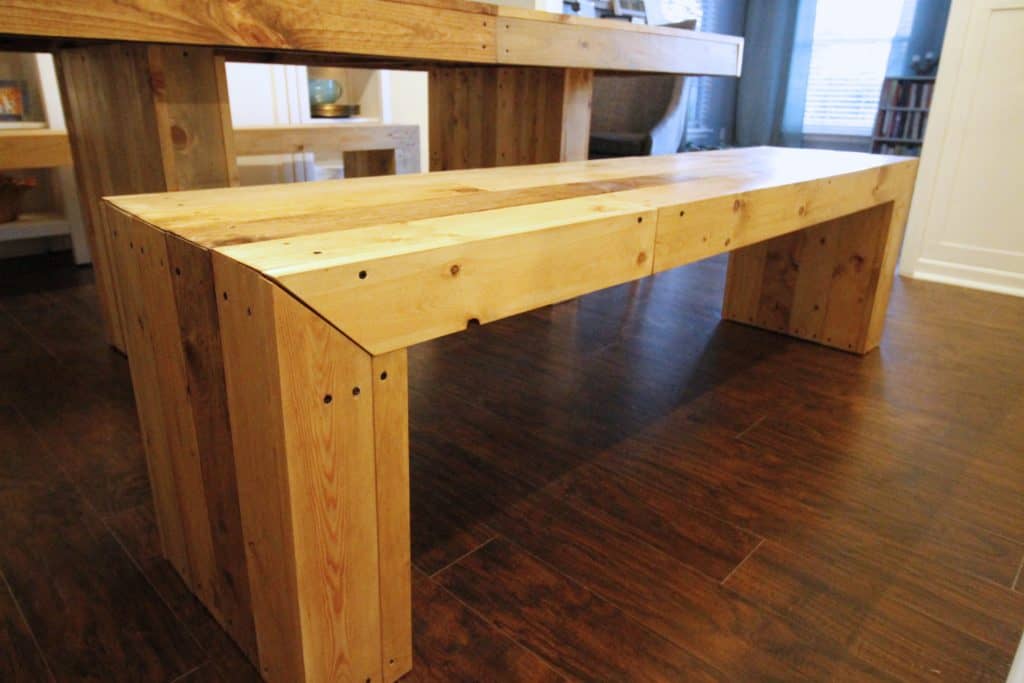 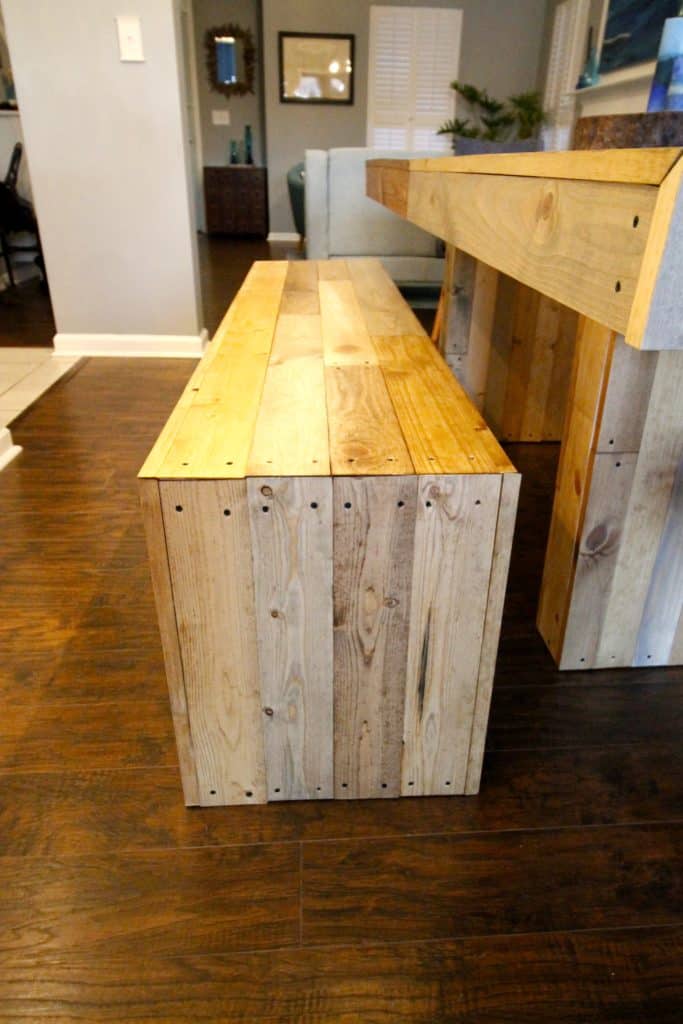 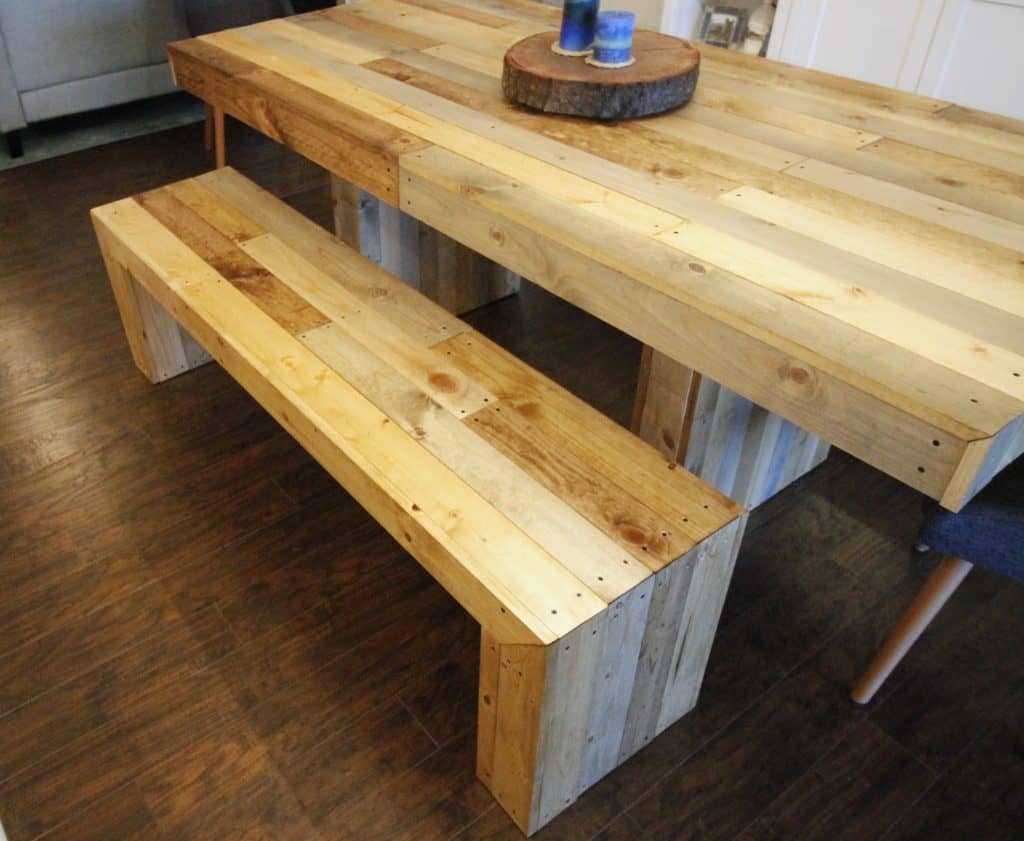 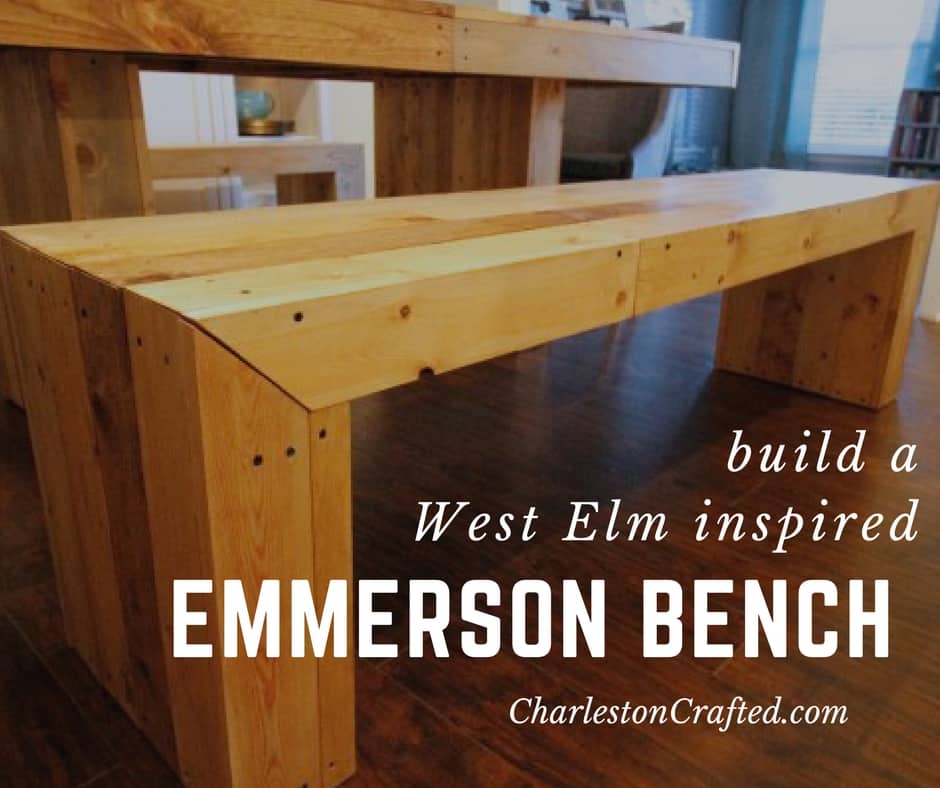 Here’s how we made the matching table

Would you make another one of those West Elm Emmerson knock offs for a local gal? I'll pay you for your time + materials.

Hey Lauren - I appreciate the ask, but right now we unfortunately don't have the capacity to build for others. Maybe once our kids are in school! Happy Holidays!