You are here: Home / Wedding / Religion & Our Wedding Ceremony

This was a topic that recently came up in conversation and I thought that it was interesting and discussion provoking enough to warrant its own blog post. I know that other people might be going through similar situations and I wanted to get a conversation going! Warning: if you don’t like religion talk, stop reading now. 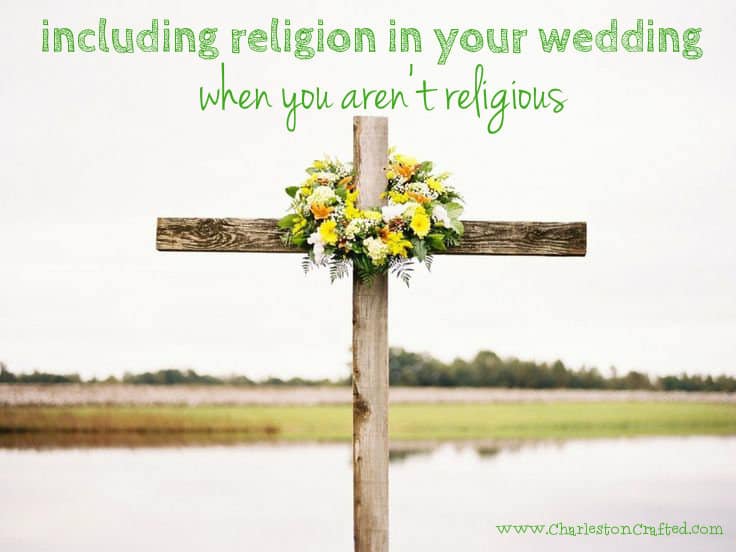 I grew up bouncing around between a few different churches, but we officially became members of the Presbyterian church when I was in the tenth grade. That’s right – I wasn’t baptized until I was almost 16. I had to attend special classes (with my mom) to become a member of the church. I was active in the youth group for about one school year (I think there was a cute boy…) but that was the extent of my exposure to religion. We go to church now on Easter and Christmas Eve (usually). I appreciate that churches can be great for people – my mom had ovarian cancer about 5 years ago and I know that her church and preacher were a great support system for her. I just have a lot of trouble getting excited about church. I honestly feel bored and restless whenever I am there and have a hard time connecting to it all.

Sean, however, has a totally different outlook. He grew up going to a non denominational Christian church. They went every Sunday, no matter what, and he also went to church several nights a week for activities. His parents are divorced and have both since changed churches (apparently churches have a lot of drama!) but are extremely involved. Sean would like for us to pick a church in Charleston and attend it regularly. I have agreed that it is something that we can do. It is important to him and I am apathetic enough about it that I will go along with him, and I know that this is something that we will have to constantly work on in our marriage- and I really want to figure it out before we have kids (so no time soon!)

But anyways, back to the whole wedding thing. It’s all involved because weddings can be and often are a religious ceremony.

I think that a lot of our relatives assumed that we would get married in a church. It is the traditional thing to do. However, from a purely practical standpoint, I tend to prefer weddings that have the ceremony and reception all in one location. That way you don’t have to worry about transporting guests or where you will take pictures or anything like that. So, when we looked for venues, a good ceremony spot was crucial to my vision. After hearing words of disappointment from several family members, we decided to look into church ceremonies. We thought that it would be an easy compromise, since Charleston is The Holy City, after all. Well, it turns out that the churches in downtown Charleston charge THOUSANDS of dollars for non-members to get married there. And members have to be a member for 12 months before being able to book at the discounted rate (don’t think I didn’t ask about joining just for the wedding. Such a heathen!)

Combine the cost of the ceremony with the extra transportation and there was just no way that we could swing it. Plus, it’s just not something that I wanted to do. If we were getting married in our hometown at a childhood church, for free (or a small donation) I would have done it just to please the masses. But our venue includes the ceremony space and time for free. For free! We still have to pay the officiant on top of that (more about that later) but that is pennies compared to renting a church.

So, we decided to get married on the deck of Cottage on the Creek. I am very happy with the decision, and others are OK with it. You can’t please everyone. But, I did want to throw them some sort of bone. So, when we were planning our ceremony, I suggested that we find a preacher (as opposed to a non-religious officiant). As I have with many wedding vendors, I threw it out on Facebook and a friend recommended Doug Farmer. Doug is a preacher but mostly does wedding ceremonies now. We met him at a Starbucks, talked about what we were looking for, and totally hit it off. He told us that he can do religious or non-religious ceremonies, and we were totally sold.

He also sent us a sample wedding ceremony text for us to customize. The ceremony that he sent us is religious. It begins with a welcome prayer, there’s a prayer after the vows, and there’s one (one sentence!) bible reading. But, we won’t have the whole group recite the Lord’s prayer. That’s lovely, but I’ve been the person in the crowd who doesn’t know the words while everyone else is reciting it and it was – I don’t want to say awkward because the Lord’s Prayer is beautiful – but it was just not something that I felt needed to be included in our ceremony.

It also includes the space for two wedding readings. We have really thought about this a lot and have decided to have a relative from each side of the family read a non-religious reading. I selected a poem and Sean selected a reading from literature. I think that having more bible verses read here would just be “not us” and sort of lying/faking how religious we are. I don’t know if that makes any sense, but something sweet but not from the bible felt more natural and comfortable to me.

Finally, comes ceremony decor. We are getting married on the deck under a big white tent. I have struggled with how to define our “alter” space. Our coordinator has arches, chuppahs, and a cross that we can use for free (rentals are included in our coordination package). I selected the cross for several reasons. First off, I thought that it would be a nod towards the fact that God was present, even if we weren’t in a church. Secondly, I think that they are beautiful. I have friends (my sister included) who often wear cross necklaces or jewelry and I think that is is lovely. However, after discussing it on the Bee after talking about it with my coordinator, I begin to question it. Would it look out of place? Is it inappropriate? Is it not “us” enough?

I am struggling to find the perfect balance of religion in our wedding and teetering between making our families happy and being comfortable ourselves. I’d love to hear how some of y’all chose to include it in your big days.