We love having a garden in our backyard. It is so fun to grow our own produce and eat from our own yard! This spring and summer we planted two gardens – our raised garden bed and our salad cucumber bed. You can read how I planned the garden here, but I really relied heavily on my notes from our garden last year to decide what to plant. So, I wanted to recap how our summer garden did and share the results with you. 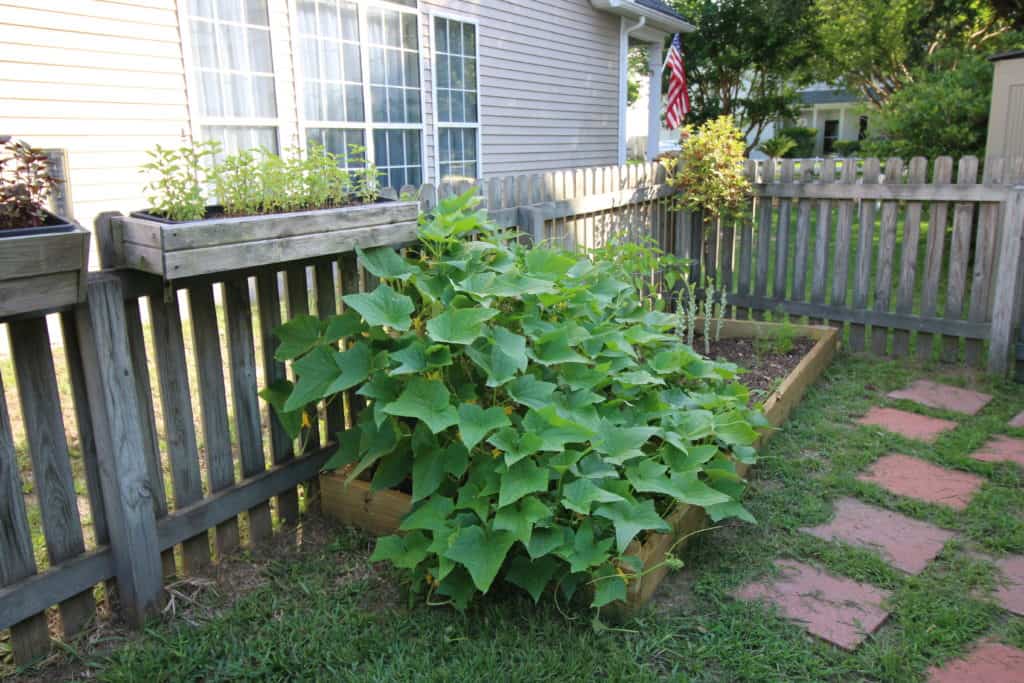 In this bed we planted tomatoes and spicy peppers. Last year, our tomatoes crushed it. This year, they did really well at first, but then something happened and they started falling off before we could pick them, then we tried picking them a little earlier to avoid that, but they didn’t taste right. They also just didn’t produce nearly as many as last year, but the bushes were still huge. Not sure what happened. We got tons of jalapeno, tabasco, habenero and cowhorn peppers. The garden was real spicy. 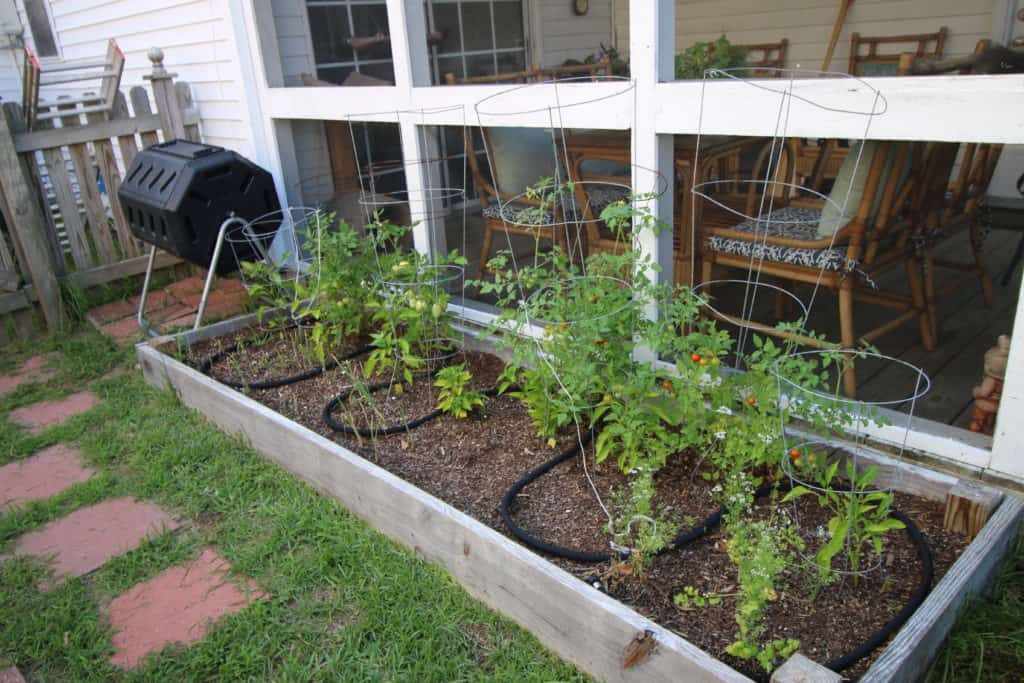 Salad Garden- aka the cucumber bed

In this bed we planted cucumbers, sweet peppers, and carrots. The cucumbers were insane. If we weren’t careful, they would grow to be competition-sized cucumbers. One day, they weren’t quite ready. Two days later, they would be monsters. We got some really good marconi peppers and dozens of banana peppers. However, our bell peppers just didn’t work out… again. Not sure why, but they aren’t really growing in our garden. We also had kale that went nuts until the bugs got them, and we had several carrots that were good, just small.

This year we had 4 window box style planters of basil – all 4 different types, all grown from seed. They were wildly successful. They grew quickly and were very bountiful. Honestly, I learned that I planted too many seeds too close together, but the density of the plants didn’t cause us any problems. We use the basil regularly and when it looks like it is starting to die up, we will cut it all and freeze it. We just had to move it to a more shaded part of the yard because they were getting fried by the sun.

We once again had a big dahlia bed on the back of our house. Half of the bulbs were from last year, but I also added 10 new bulbs this year for a denser look. Can you tell that I like dense gardens! They did really well for a while, but we do have a few problems with them. Some get so tall that they can’t support themselves – we definitely have to stake them, especially in rain storms. They also seemed to get a bit burnt/dried up, even with frequent watering. I guess it was just too hot! These were especially pretty in May and June. 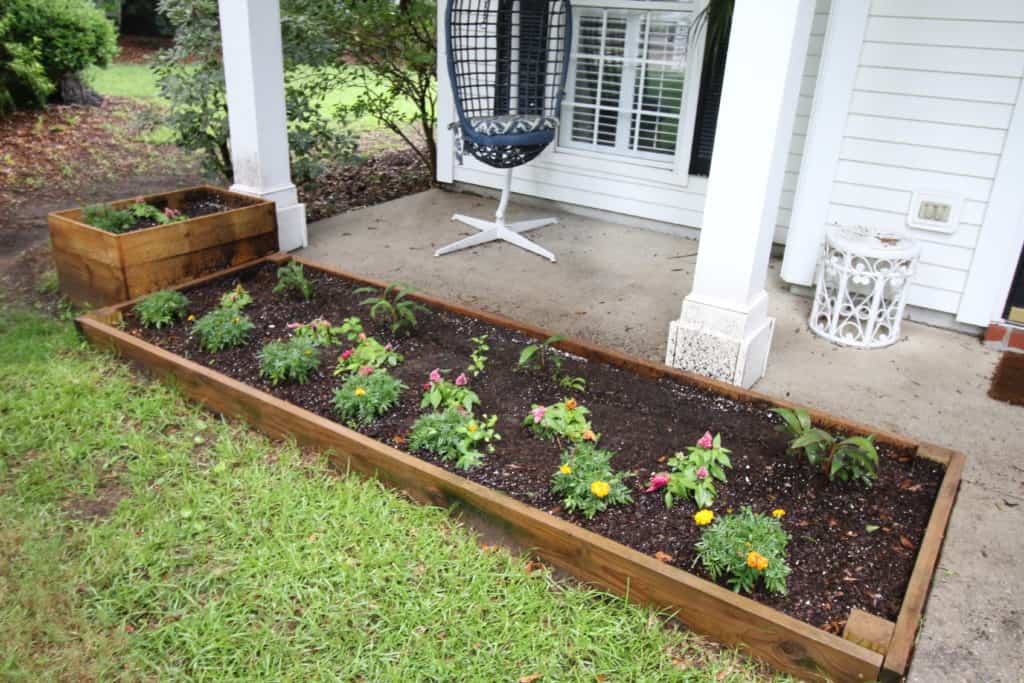 We went through a number of different plants in the front flower beds. Even though the sun isn’t very bright in the front yard, the marigolds and celosias didn’t last long. We planted a few other things that have looked nice while they thrived. The best thing was that the Hawaiian Thai plants that died in this year’s freeze started coming back! We weren’t expecting that and they look great.

Did you have a summer garden? What worked well for you and what did not?

Just came across your blog and it’s right up my alley! I’ve got a ton of oak trees too and have been in a love/hate relationship with my shady yard for several years now. There’s been a lot of realization that many plants need a lot more sun than I thought. Hydrangeas really need close to full sun to really thrive. If they at least have a few hours in the morning, they’ll stay alive and bloom, they just don’t grow a whole lot bigger. Flowers that have worked for me are impatiens. They grow quickly into mounds of nonstop flowers all summer until the first frost. Cut them back midsummer or they’ll get leggy. You can switch them out with pansies for the winter. Ferns, elephant ears and hostas work well too. Encore azaleas bloom multiple times a year, mine actually have flowers right now. Camellias also do well and have gorgeous blooms, some varieties in winter, some in spring. Gardenias thrive in areas with at least a few hours of sun.

My only other advice would just be to be really careful if you have asian wisteria. It’s super invasive and can take over everything and be impossible to get rid of. Like bamboo and kudzu.

wow thank you so much for all the great flower tips! We are going to be working on our "natural area" in the front yard next year and I will definitely look into a lot of these that you mentioned. It would be nice to add some color to that space!