One of the things I was most excited about with buying a house was the prospect of a yard. I had a huge yard as a kid and really wanted space to call our own outdoors. I wanted to do yard work and I wanted a place for CiCi to run around like an insane puppy. Unfortunately, the Charleston real estate market doesn’t offer a lot of them like they did where I grew up (in Charlotte). Luckily, we were able to find a house that actually has a pretty good sized lot, especially compared to most in our price range and area.

Upon initial inspection, we discovered that our backyard has no trees and no shade, while our front yard has big oak trees and tons of shade. These both cause issues in their own respects for different types of things. Right now, the backyard is filled with ants (which we’ve been working to minimize) and the front yard is mostly barren patches of dirt with a lot of mole hills. Once we get to the fall, I really want to lay down a bunch of weed and feed and kill the weeds and grow some consistent grass. I don’t know how well some of these super shady areas will take, nor do I know how well it will work in the constant sun, but we’re gonna try.

We have a patch of four trees that are group together with some bushes in the middle. We want to rip out those bushes and put up a nice border around the trees so that we can make a beautiful flower garden to greet people on the street. 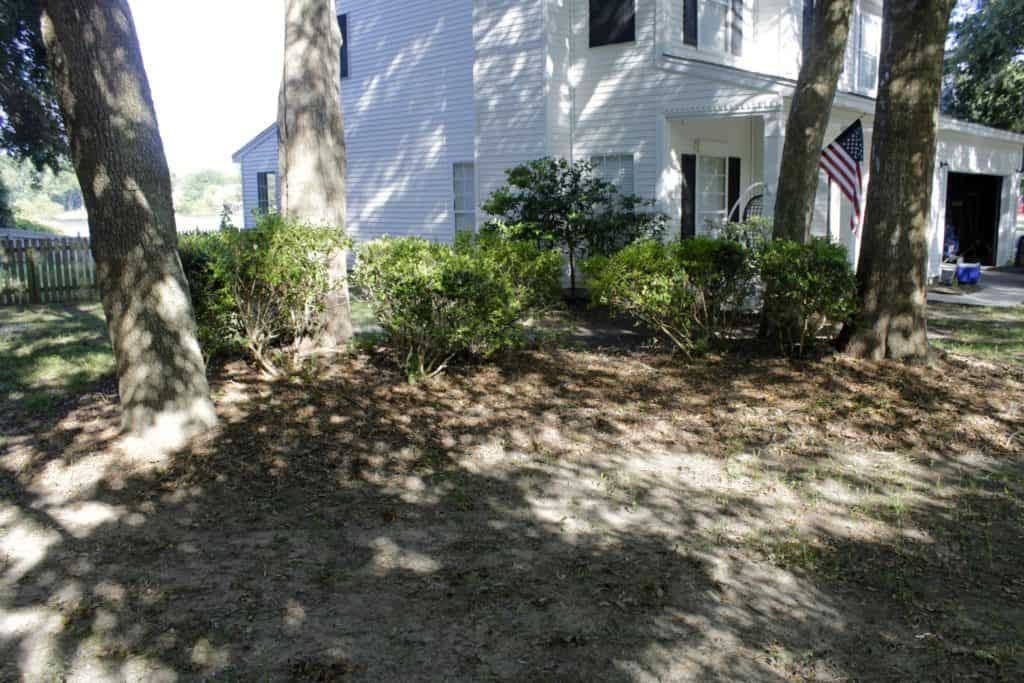 There are small, dead-ish bushes in front of the porch. We need to rip those out and plant new ones that actually look appealing to humans. 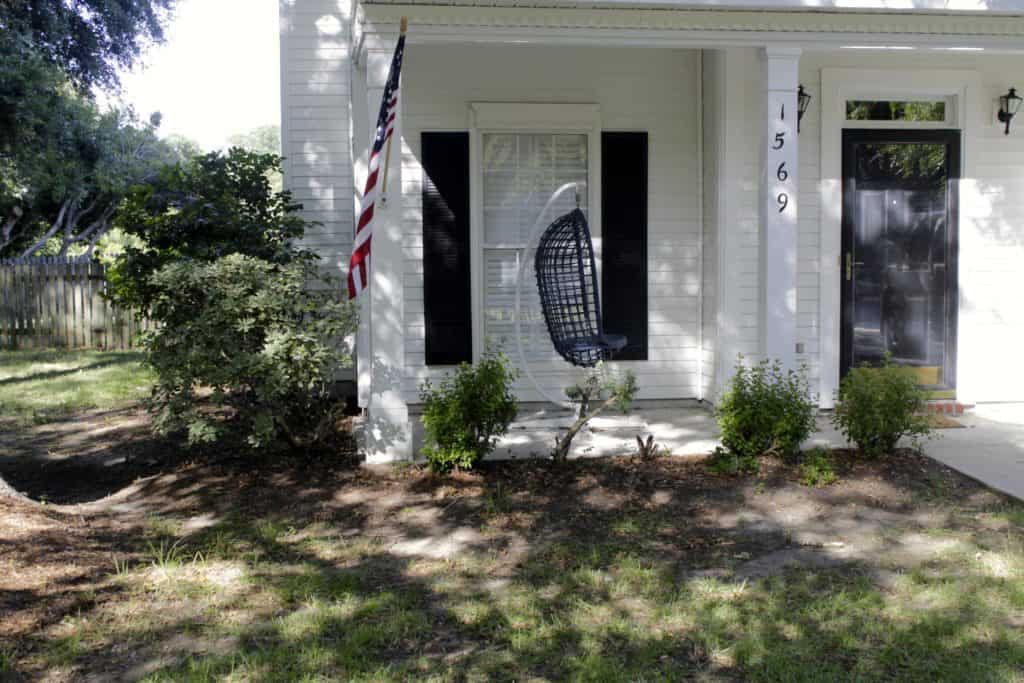 To the right of our driveway is an area that is completely dirt and is under the big shade of an oak tree. Everyone I’ve talked to says there is no chance we’re going to be able to grow grass there, but I want to try. If it doesn’t work out, we have the idea to lay down some pavers or stone and create essentially an extra parking space where people can pull to the side of the garage. Maybe we’ll even turn it into a nice courtyard. 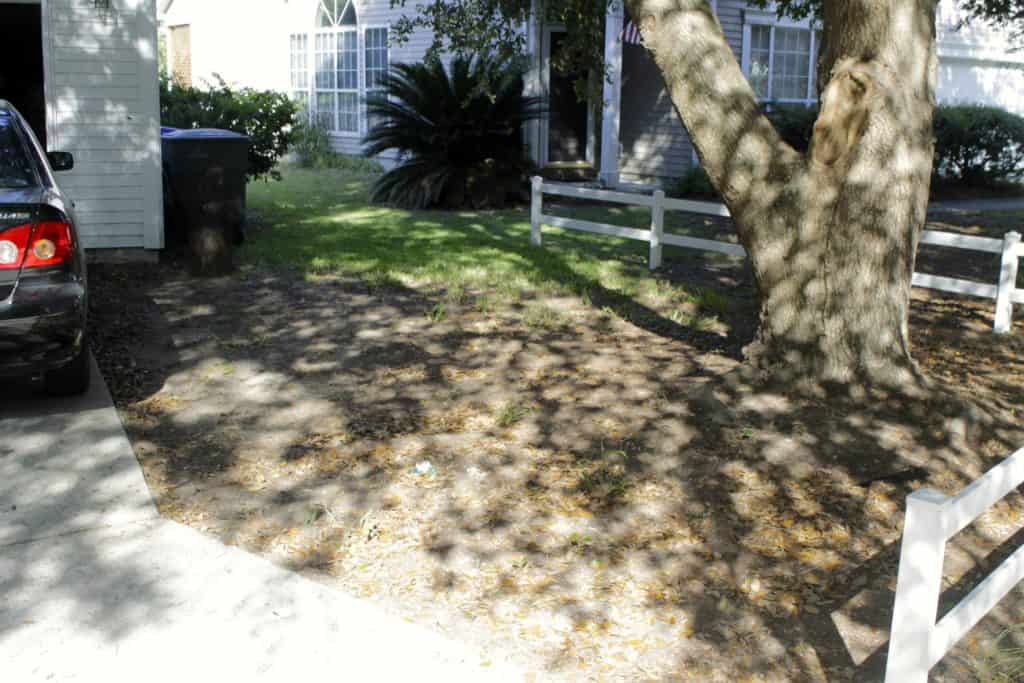 Again, the back yard has a lot of nasty looking bushes along the back of the house. The previous owners just cut everything down before they sold it and it looks terrible. We want to rip those out and build some nice planters that we can plant flowers and smaller plants in to grace the outside of our sun room. 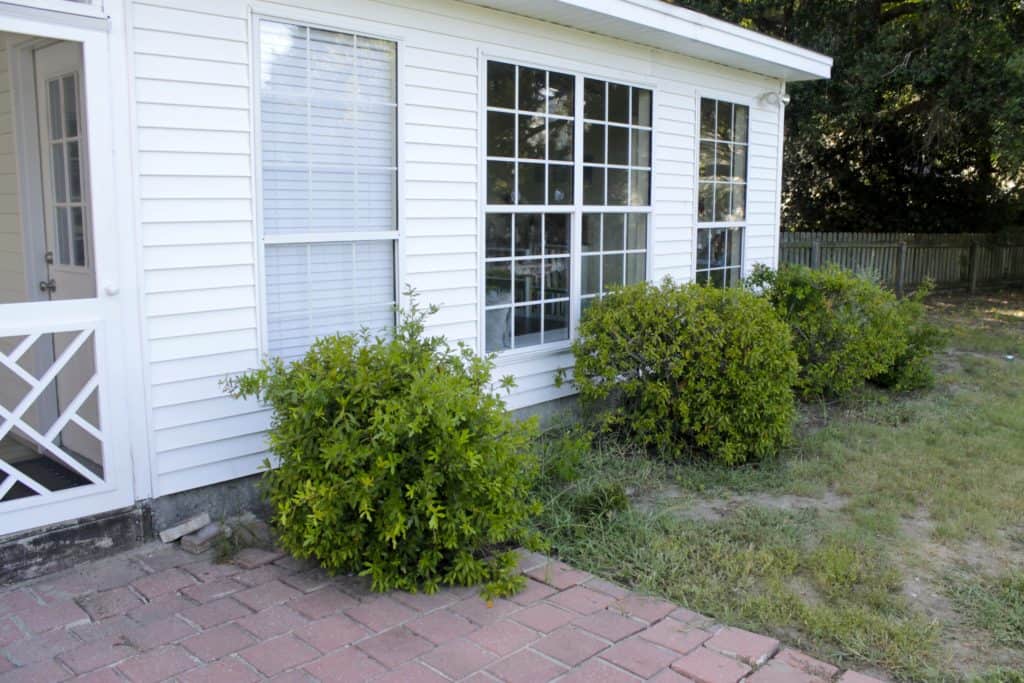 Speaking of bushes (we have a lot of groddy looking bushes at this house), there are a bunch of half-destroyed bushes to the side of the house right next to the screened-in porch. We’re going to rip these up (those roots will suck) and plant our garden here. We can’t wait to have fresh herbs and veggies! 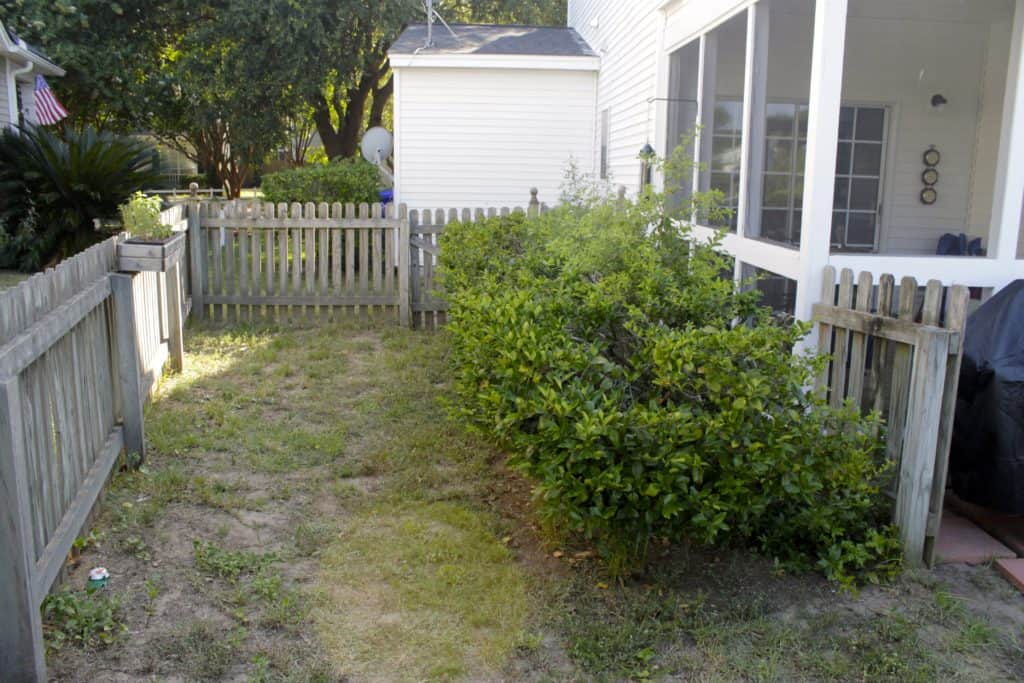 There is a fence running through the middle of the back yard. It’s technically a dog run, but we would never stick CiCi over there by herself, so we want to rip out this fence and make the backyard feel even bigger! 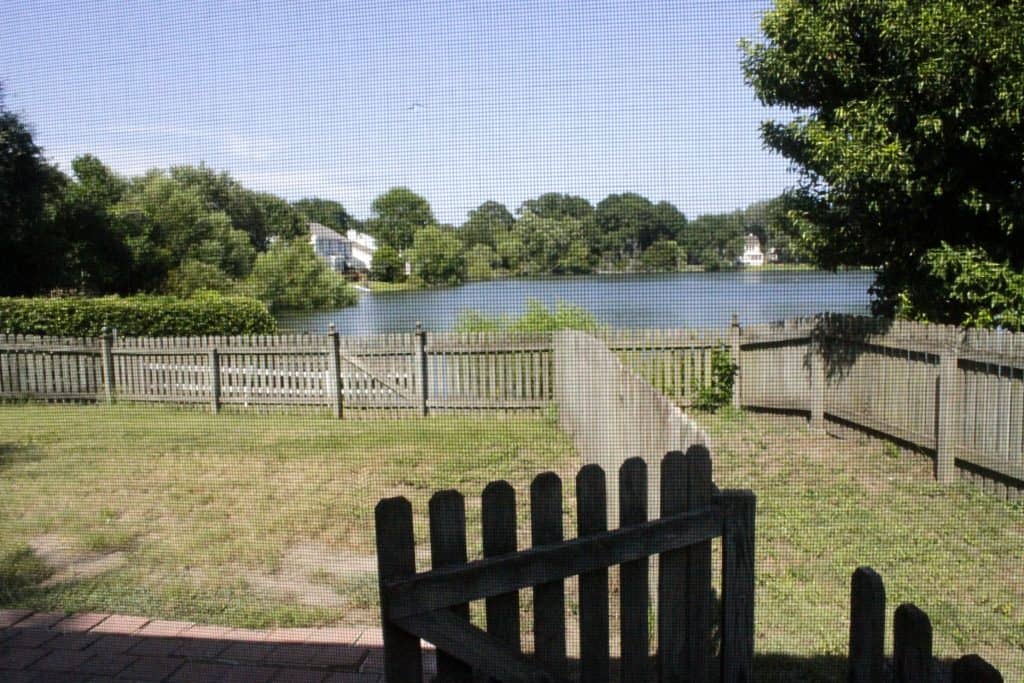 Long term, it would be great to have some trees of some kind in the back yard and we’re thinking of adding some palms. There are lots of palm tree varieties, so we don’t know which one will do yet, but with this water view, it would be nice to have some lovely palms. But first I need to rip out this one weird bush. 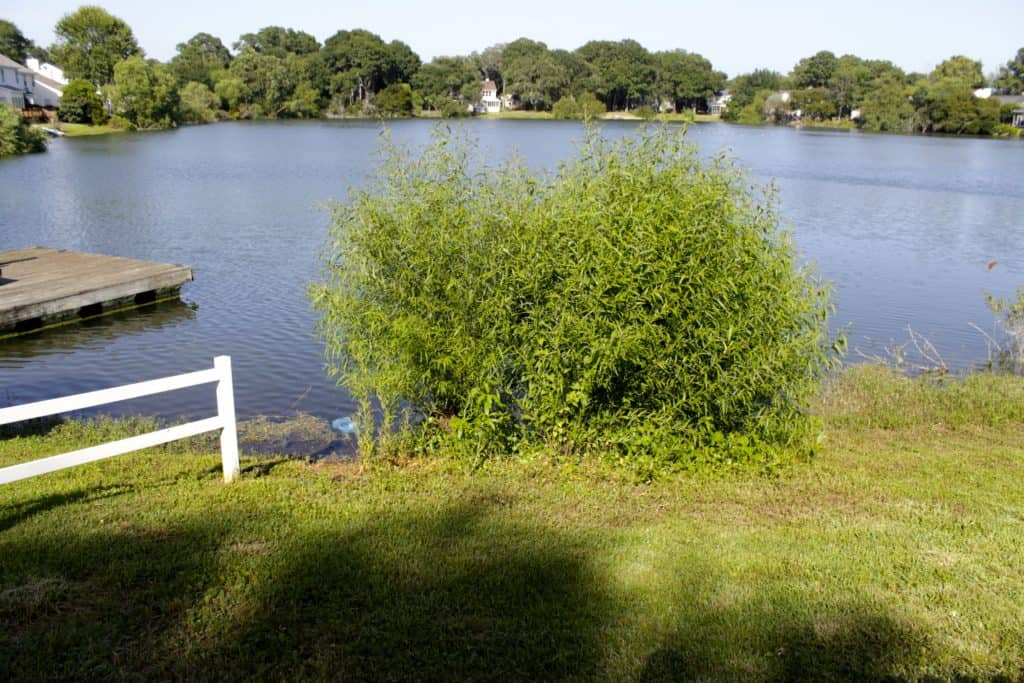 There is also currently a firepit smack in the center of the backyard. We dig a fire pit but don’t love the placement. We are thinking of moving it but aren’t sure of an exact spot. Any thoughts on how far from the house they need to be?! 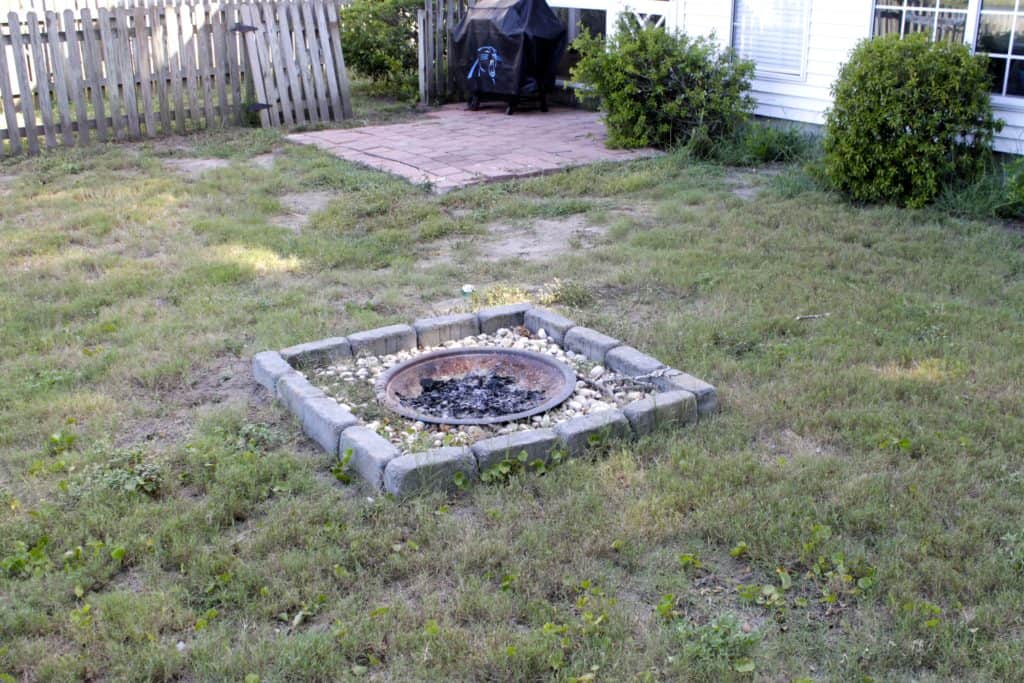 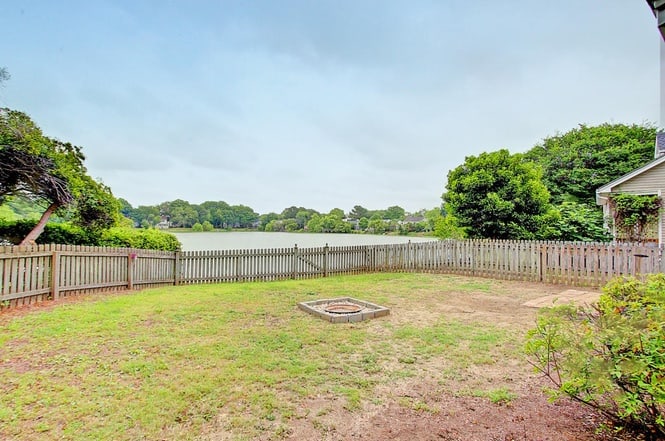 So that’s our initial plan for our yard. It’s going to be a lot of hard work, but it will make our space beautiful. We probably will do some of the tearing of bushes in the near future, but we won’t be doing too much out there until it cools off a bit. Nothing will grow in the dead heat of summer anyways, so most of the work will be preparing the spaces for next spring. In the meantime, we have some planters to build, a garden to shape and lots to do!

« How to Repair Broken Plantation Shutters
Give it a Sparkle »