Wondering how to frost glass windows in your home? It’s easier than you might think using frosted window film! Here’s how. 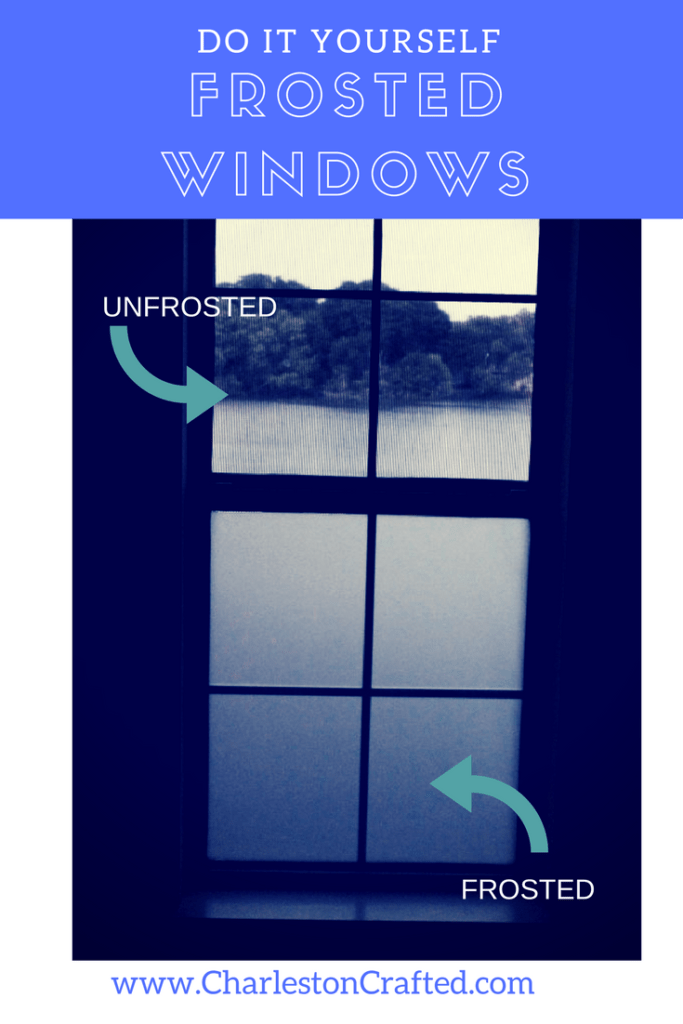 It’s funny the things that you do and don’t notice when you tour a house. People notice layout and paint colors but often overlook the little details. One little detail that we totally overlooked was the fact that there are 2 big windows right next to our new master shower.

Clearly, this isn’t a deal breaker, but considering that one of them faces the sidewalk in front of the house and one faces the community lot next to us, we quickly realized that anyone getting out of the shower would be giving a free show. Since the windows go rather low (below the bottom of my butt cheeks when I’m standing up!) it was quite a good show. And it needed to be fixed, stat. 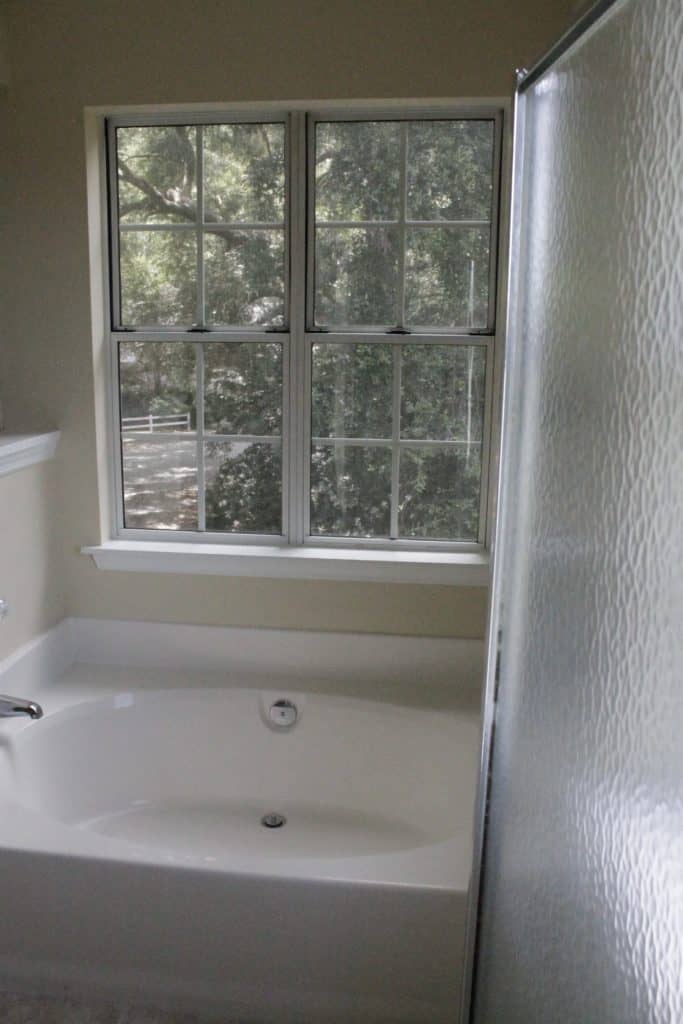 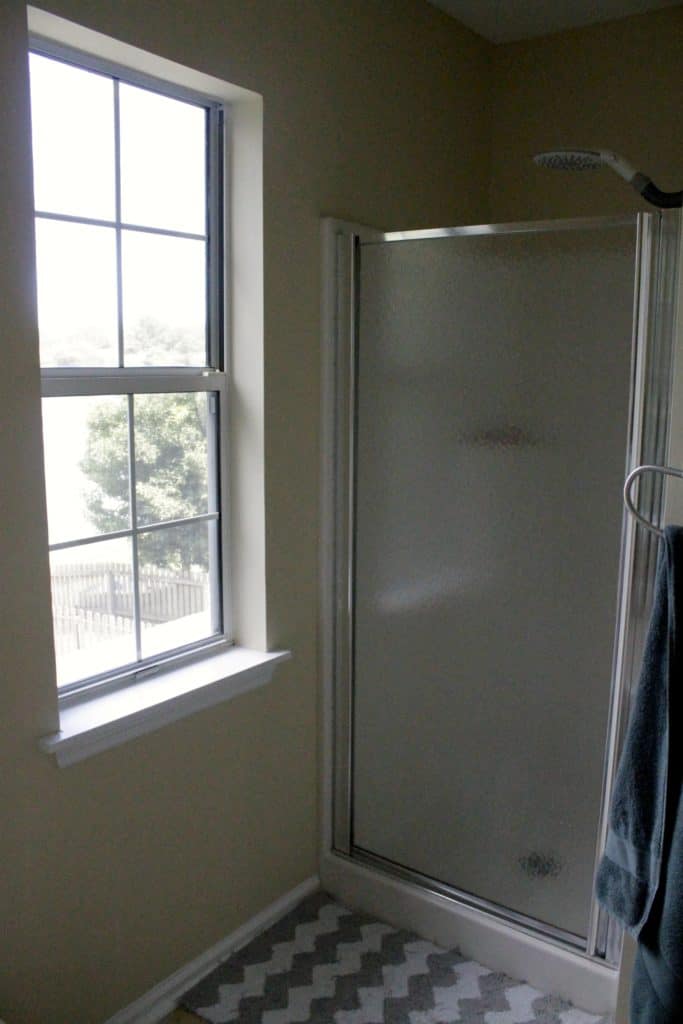 After a quick google, I decided that we could easily frost the bottom half of the windows (up to above-boob height). Frosting the glass would allow light to still come in, and leaving the top half open would allow us to still look out and see the view, without feeling exposed.

I ordered this privacy frosted cling film after verifying that the 35 by 78 inch roll would be enough to do all 3 of our windows (one single and one double over the tub).

The product was great and easy to use, though I will warn you that it does not come with a squeegee so we had to improvise. To instal it, measure a piece the size of your window + 1 inch in each direction. Peel off the backing (good luck! You need a razor blade or long nails.) 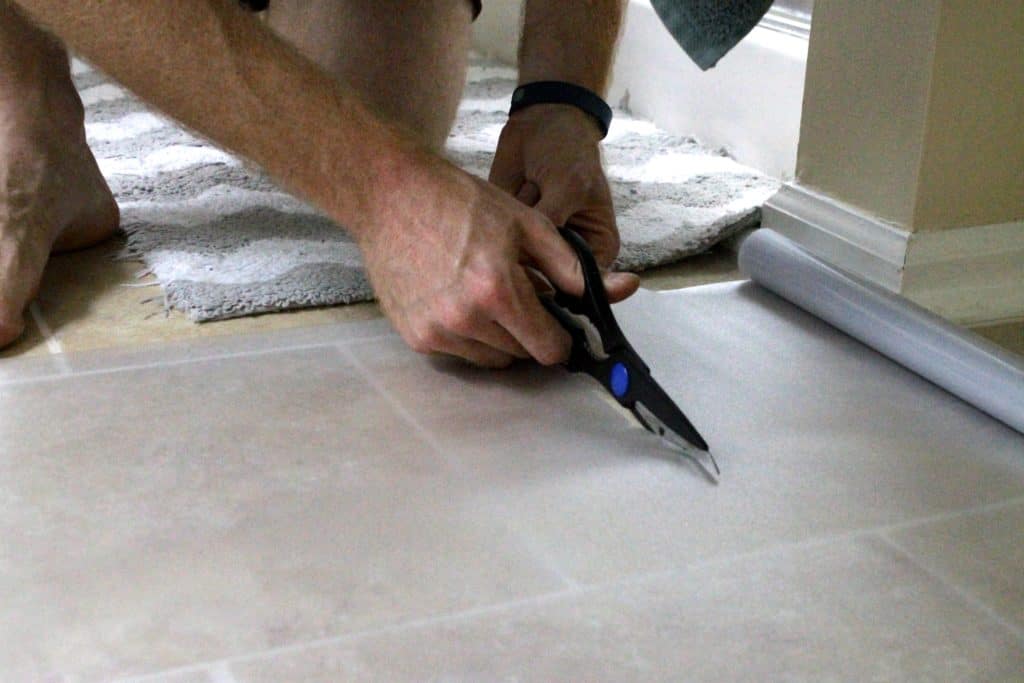 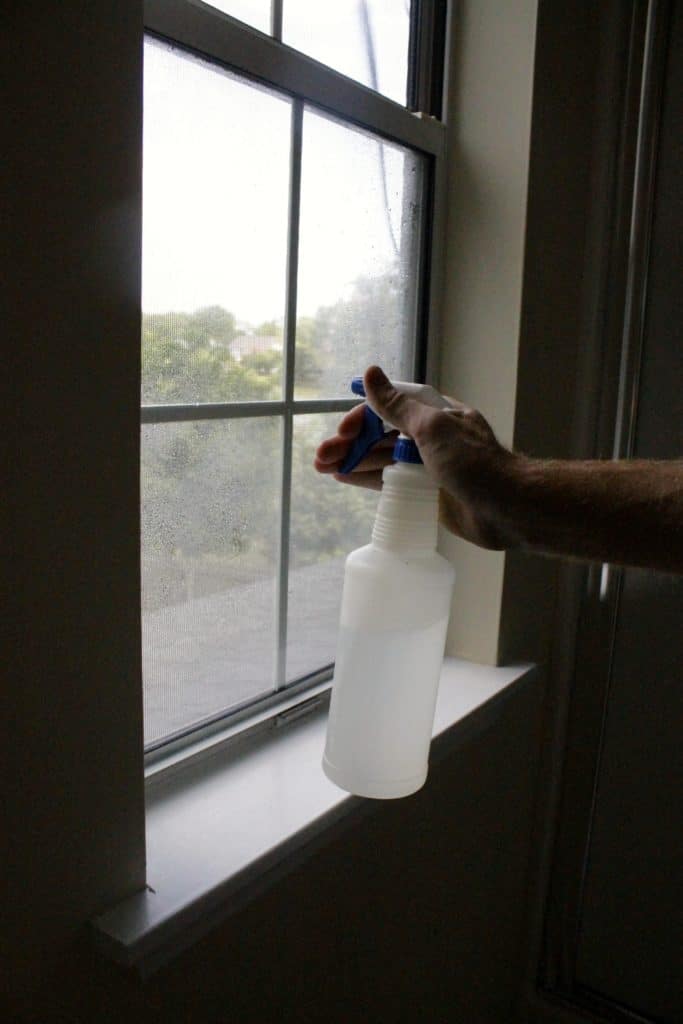 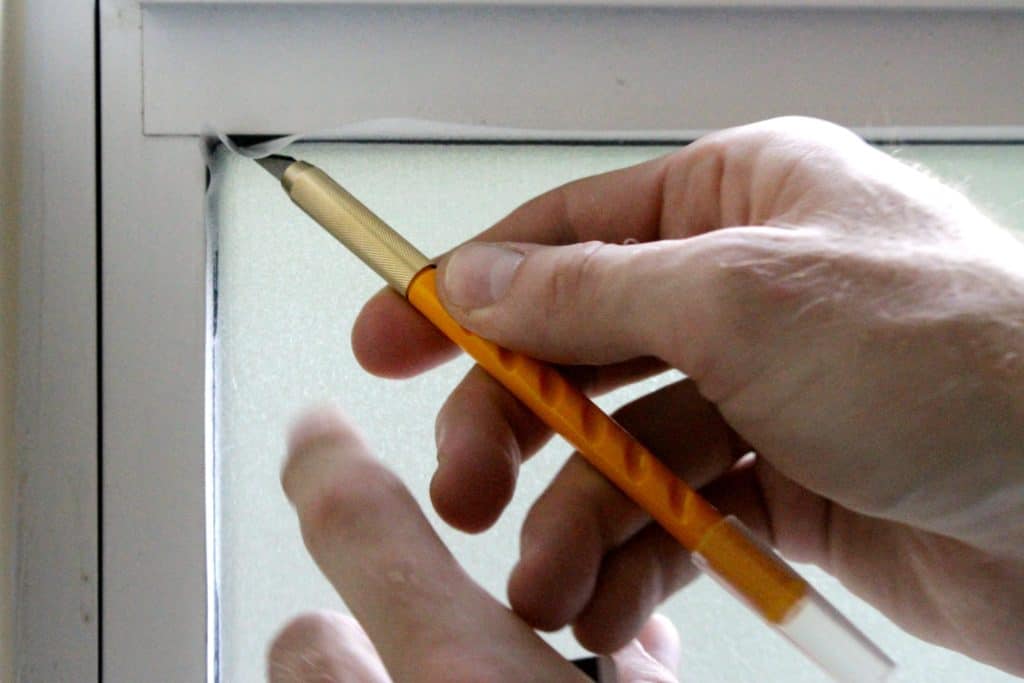 How to frost glass windows in your home

Spray the window entirely with water then place the cling on the window. Now is when it starts feeling like putting a protective screen on a cell phone. Use a squeegee (or the spine of a book in our case) to push out all of the air bubbles.

It helps if you let your more detail oriented partner take over this step. Then use an exacto knife to trim the edges of the film. This was great because my biggest worry was cutting it straight, but putting it in place and then trimming it made that a non-issue. 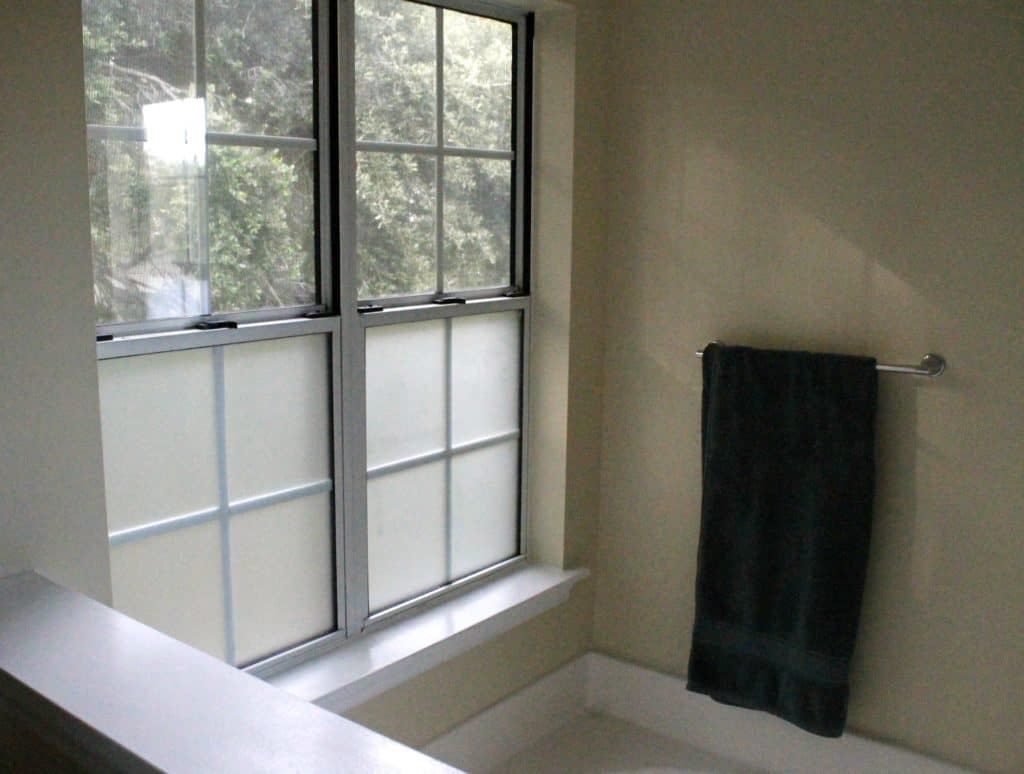 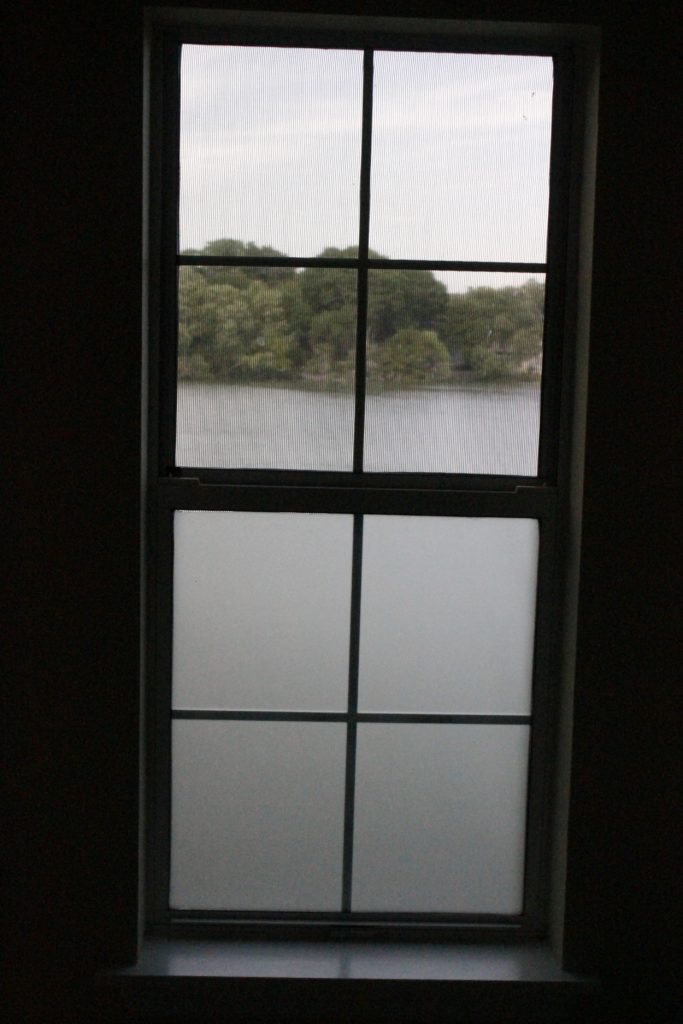 It was a quick and easy process. Shockingly so, it feels like the first project in this house that went as planned. Now we can get out of the shower at night with the lights on or in the middle of the afternoon or any time and not worry about little kids fishing on the pier seeing our bits. Hooray for small victories.

Sharing Some Of The Best: July's Monday Madness

[…] Window covering isn’t always this easy! But it is important not to scare your neighbours and come up with solutions that allows modesty and yet doesn’t take away the light and often the view! […]