About a month ago, we bought a pair of Fitbit Flex fitness trackers. We have worn them every day since and have mixed thoughts on them. We are excited to share our thoughts in this Fitbit Flex review and hear of any experiences that you might have with similar products! 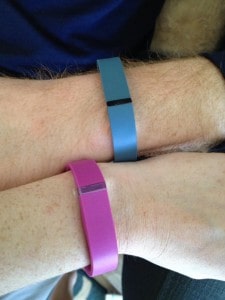 The Fitbit Flex is a fitness tracking wrist band that we bought at Target for $99. It has a silicon band and appears kind of like a Livestrong bracelet. It has a snap, sort of like a watch. There is a fob – about one inch long – that slips inside the band which is your tracker.

You wear the Fitbit all the time, unless you are in water. It is “water resistant” but we have been taking ours off to shower, just to be safe, and so we can wash underneath it! Sean was specifically told not to swim with it on and to enter that activity manually.

The Fitbit tracks your steps, distance, and calories burned. It syncs via Bluetooth to a free app on your smartphone or to your dashboard on fitbit.com. 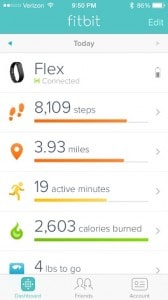 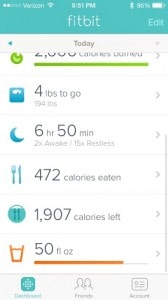 You can also use the Fitbit app to track caloric intake (the food you eat), the amount of water you drink, or other activities and exercise. I have been using My Fitness Pal (a free app) for a long time and was glad to see that it would sync to the Fitbit app. So, I enter my food on My Fitness Pal as usual, and it appears on my Fitbit tracker. Instead of sending individual foods, it just groups them as “breakfast,” “lunch,” or “dinner” and has a total for the whole meal. Sean uses the Fitbit app to track his food. It’s very easy to use, though Sean says it has a less robust food inventory than My Fitness Pal.

The biggest reason I bought and like my Fitbit is accountability. Having my step data at my fingertips makes me so aware of my fitness levels. For example, I have realized that, if I had a normal work day, came home, watched TV and went to bed, I could easily have less than 2,000 steps a day. But, if I go walk outside for only 15 minutes on my lunch break (something I’ve started doing since getting the Fitbit) I can easily get over 1,500 steps! The preset goal on a new Fitbit is 10,000 steps, so that is huge.

(This post was not sponsored by Fitbit. We bought them at Target fair & square. We read a ton of reviews and talked to friends about a variety of products before selecting these and wanted to share our two cents with our little slice of the internet!)

Do you have a fitness tracker?