You are here: Home / Wedding / A Lull in Wedding Planning?

One great thing about having a long engagement (ours is one year to the day!) is that we have plenty of time to plan things. On the other hand, I often find myself thinking “Let’s just do it already!” We are about 6 months out from the wedding right now, and people are constantly asking us how the wedding planning is going. It’s totally weird – I feel like we’ve hit a major lull. 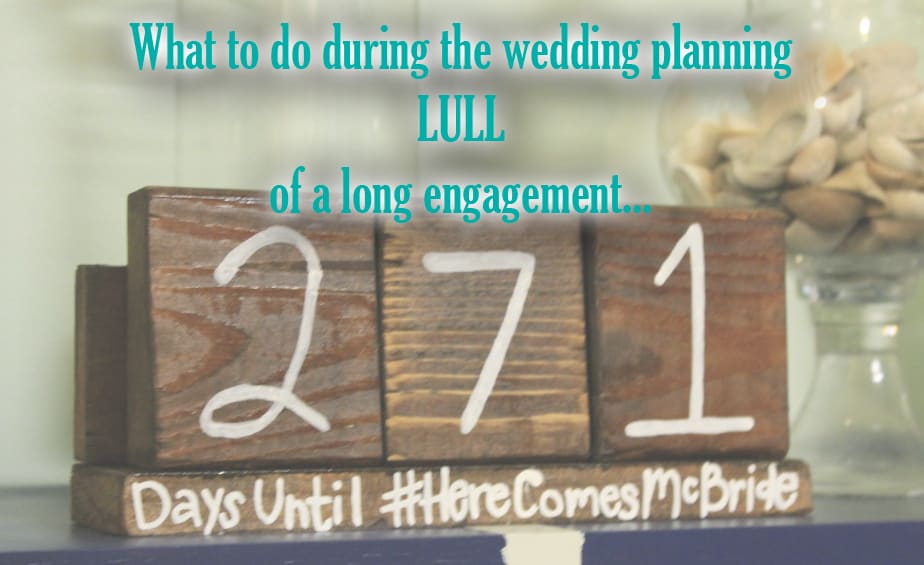 The first couple of months were filled with venue visits, budget discussions, and big picture planning. We went on tours, made spreadsheets, booked vendors, and paid deposits. However, at the moment, it feels like there’s nothing to do. It’s nice in that we haven’t had any wedding bills come up, but it’s very unnerving to feel like we should be working, but it’s just too soon to do a lot of things.

After scraping our brains, here’s what we’ve come up with and have been working on. We are hoping that getting certain things out of the way now will alleviate stress later.

So, even though I have months until my wedding and feel like there’s not much to do, I really can work on some things now so that spring will be much less stressful.

How long was your engagement? Did you ever feel like you had nothing to do?!?

« Sewing 101: a Striped Table Runner with a Pointed End
Painting the Coral… Coral »